The funds from the Department of Transportation are earmarked for the Growing Regional Opportunity with Leveraged-Infrastructure Fleet Expansion project, also known as GROW LIFE.

The funds will be used to purchase about eight 40-foot and a dozen 30-foot zero-emission, battery-electric transit expansion buses and corresponding chargers to create new and expanded bus service in the Antelope Valley, which could support the area’s aerospace industry, DOT officials said.

Many of the buses will be used to service new transit locations that will cover distances of about 30 miles or longer and promote access for lower- income populations.

U.S. Secretary of Transportation Elaine Chao said the funding is part of a $900 million investment in the nation’s infrastructure through the Better Utilizing Investments to Leverage Development discretionary grants program.

“The administration is targeting BUILD Transportation grants to repair, rebuild and revitalize significant infrastructure projects across the country,” Chao said.

UPDATE/Editor’s note: A previous version of this story said the funds were awarded to the city of Lancaster; however, the federal BUILD grant was actually awarded to the Antelope Valley Transit Authority, according to an AVTA official, who contacted The AV Times and forwarded the image below. The news release/announcement from the U.S. Department of Transportation said “Lancaster, California” but did not specify an agency. We’ve updated our article to reflect the correct information. 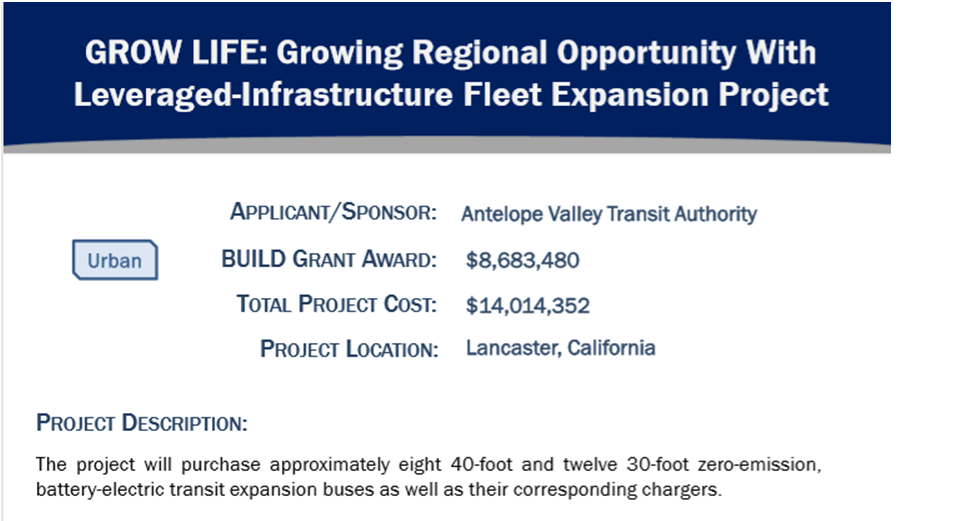