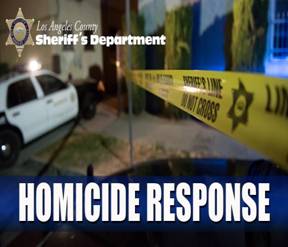 LANCASTER – Sheriff’s homicide detectives are continuing to investigate the deaths of two men, apparently in their 20s or 30s, who were found dead in a tent in the Lancaster area on Saturday.

Deputies responded to a rescue call around 1:50 p.m. Saturday, Nov. 2, near 210th Street East and East Avenue I, and “when deputies arrived, they found two deceased Hispanic men inside of a tent enclosure,” according to a news release from the Sheriff’s Information Bureau.

“Detectives found no signs of trauma, or obvious signs of foul play,” the news release states.

“Los Angeles County Department of Medical Examiner-Coroner investigators responded. They will be determining the identity and cause of death for both men, who appear to be in their 20s or 30s,” the news release states.

No additional information on the incident has been released.

Sheriff’s Homicide Bureau investigators are asking anyone with information regarding the deaths to call them at 323-890-5500. Tipsters can also call Crime Stoppers at (800) 222-TIPS.

UPDATE: The men were identified by the coroner’s office as Miguel Rivera, 28, and Rufino Rivera, 36. Their hometowns are not known and autopsies are pending to determine their cause of death.