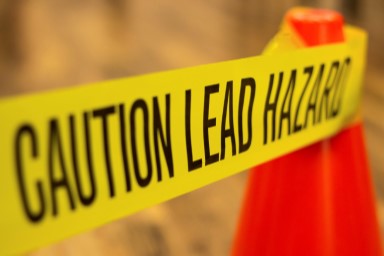 LOS ANGELES – Anticipating a $134 million payout from paint manufacturers, the Los Angeles County Board of Supervisors voted Tuesday to take a variety of steps to launch a massive lead-based paint clean-up effort at the start of 2020.

Supervisors Janice Hahn and Kathryn Barger co-authored a motion to get the work underway.

“We have our work cut out for us,” Hahn said, estimating that at least 5,000 homes are in need of remediation.

The county will prioritize homes built before 1951 in low-income communities with a significant population of children under 6 years old.

“This will be the biggest remediation effort this county has ever seen,” Ferrer said.

The clean-up work is aimed at reducing the incidence of lead poisoning among children, which can damage the brain and nervous system and lead to developmental delays, and behavioral, hearing and speech problems. No safe blood-lead level in children has been identified by the Centers for Disease Control and Prevention.

“Children are still being poisoned by paint that these companies sold years ago,” Hahn said, estimating that nearly 3,000 children countywide are diagnosed with lead poisoning each year.

The settlement money is expected to be paid to the county in roughly equal increments over a period of six years and will be spent on both testing and remediation.

Ferrer said some lead clean-up work has already begun using other funds. However, even $134 million won’t be enough to eliminate lead exposure in every single home where it exists, according to the public health director.

She estimated that it will cost between $10,000 and $25,000 to remove lead-based paint from a single home and said additional costs would be incurred for temporarily relocating families and evaluation.

“Families deserve to know that their houses are, in fact, lead- free,” Ferrer told the board.

Within the targeted communities, teams will move quickly to help households with children with elevated blood-lead levels or pregnant residents.

The effort will be managed by the county’s Department of Public Health and the Los Angeles County Development Authority, and the board authorized new dedicated staffing for each agency.

The supervisors also approved a plan to hire homeless individuals for up to 15% of the jobs related to the clean-up. At the end of the first year of work, the board plans to reevaluate the success of that target and potentially increase the percentage.

Settlement of the lawsuit against the Sherwin-Williams Co., ConAgra Grocery Products Co. and NL Industries Inc. includes a payout of $305 million in total to 10 California cities and counties.

The plaintiffs alleged that the manufacturers advertised lead paint for use in home despite knowledge of the health hazards.

Sherwin-Williams countersued, telling the court that white lead paint was the “gold standard” of paint since its use in colonial times on the Capitol, White House and Mount Vernon and saying it was specified for use on residential interiors by government agencies through the 1950s. The company’s flagship interior paint did not include lead and little was done to promote lead paint, according to Sherwin-Williams.

In a statement issued in July, Sherwin-Williams called the California ruling an “aberration at odds with other judicial decisions across the country, where all other appellate courts have found that companies should not be held retroactively liable for lawful conduct and truthful commercial speech decades after they took place.”

Despite believing the suit to be “unfair, unwarranted and unwise,” the company said it agreed to settle to avoid dragging on litigation for years with an uncertain outcome.

“If you make a mess, you clean it up,” Kuehl said. “For years, (the paint companies) refused to take responsibility … this is a very, very good day.”