UPDATED 10.12.19: All roadways have been reopened, and all evacuees of the nearly 8,000-acre Saddleridge Fire were allowed to return to their homes on Saturday, Oct. 12. Firefighters have the brush fire 33% contained, though it continues to burn and fill the air with smoke, authorities said.

People who need to get to Los Angeles or the San Fernando Valley will need to take State Route 126 to the Ventura (101) Freeway in Ventura and return to the Los Angeles area.

The blaze was reported just after 9 p.m. Thursday, Oct. 10, off the westbound Foothill (210) Freeway near Yarnell Street and Saddle Ridge Road in Sylmar and quickly spread due to wind-blown embers that jumped the Golden State (5) Freeway about 11:20 p.m., sparking a fire that burned into Granada Hills and Porter Ranch, according to the Los Angeles Fire Department.

All lanes of the northbound San Diego (405) Freeway at the Ronald Reagan (118) Freeway in Granada Hills were closed about 2:20 a.m. Friday for an unknown duration and all traffic was diverted off the San Diego Freeway to the east- and westbound Ronald Reagan Freeway, the California Highway Patrol said.

In Santa Clarita, the following closures were in effect Friday morning:

— The Old Road at Calgrove Boulevard.

The fire had burned roughly 4,700 acres as of Friday morning, one firefighter suffered an eye injury, and 25 homes were damaged so far, authorities said at a press conference. About 1000 firefighters and eight helicopters with fixed wing air tankers were deployed to battle the blaze, which was 0% contained as of 8 a.m. Friday, Oct. 11, authorities said at the press conference.

The fire has prompted 100,000 people to evacuate the area, and officials have evacuated 23,000 homes, according to CNN, which has live updates on the fire here. 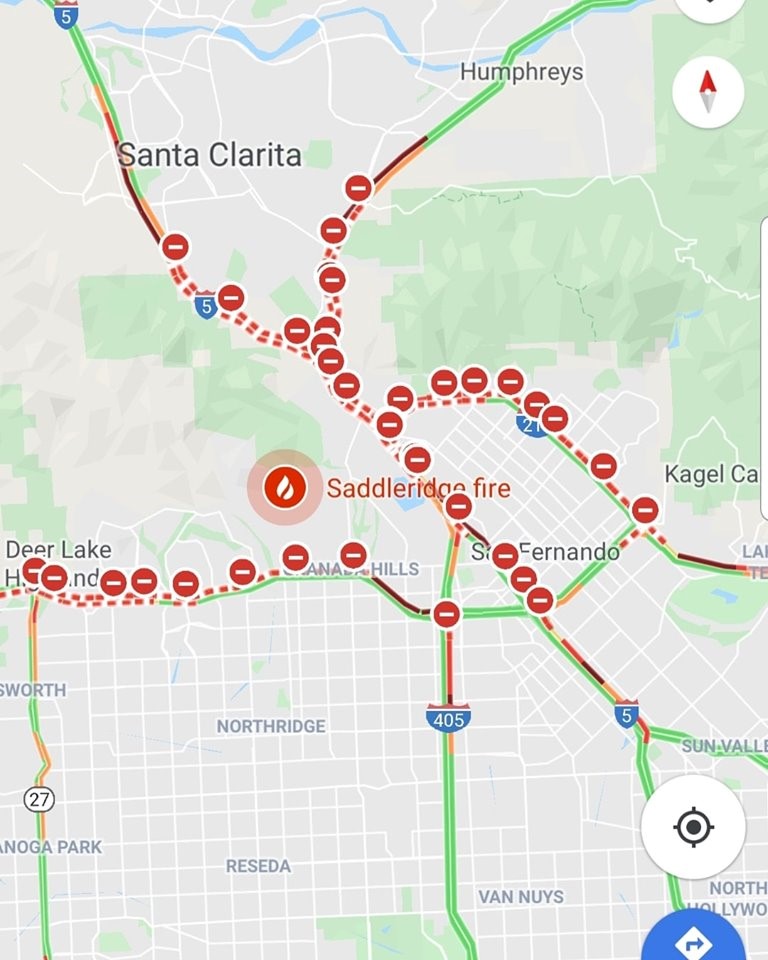