LOS ANGELES – In a rare Saturday night press conference, Los Angeles County Sheriff’s Department officials revealed that the rookie deputy who claimed he was shot in the shoulder at the Lancaster Sheriff’s Station “completely fabricated” the incident and would be relieved of his duties.

After getting interrogated due to doubts raised from his testimony, Reinosa admitted that he was not shot at from an apartment complex near the station as he previously claimed, sheriff’s Capt. Ken Wegener said.

“He also told investigators that he had caused the holes in his uniform shirt by cutting it with a knife,” Wegener said. “There was no sniper, no shots fired and no gunshot injury sustained to his shoulder. “(It was) completely fabricated.”

Reinosa has failed to provide information concerning his motivation, according to Wegener.

The investigation is ongoing and the sheriff’s department plans to present the case to the Los Angeles District Attorney’s Office for consideration of charges that could include false reporting of an emergency, the captain said.

“We intend on relieving Deputy Reinosa of his duties,” Limon said.

Officials told reporters several things did not add up: No bullets were recovered in the parking lot, no cars were struck by gunfire and many people in the vicinity did not hear any gunshots.

The alleged ambush was reported by Reinosa at 2:48 p.m. Wednesday, Aug. 21, leading to a containment perimeter and an hours-long search of the four-story apartment complex from which Reinosa claimed the shots were fired toward the station parking lot in the 500 block of West Lancaster Boulevard.

The apartment building was locked down, as was a nearby school, sheriff’s officials said.

Dozens of SWAT deputies descended on the scene via helicopter and armored vehicles. Tactical teams checked each apartment, officials said.

The search of the apartment building and surrounding area wasn’t concluded until 5:30 a.m. Thursday, Aug, 22, according to the department.

The shooting report prompted Lancaster Mayor R. Rex Parris to express concern about the location of the apartment complex that houses mentally ill people to be so close to the sheriff’s station.

“Of course it’s insanity,” Parris said. “It’s outrageous to have that population in that location. Thank God we don’t have a funeral.”

“There shouldn’t be a double standard of justice,” Ali, director of Project Islamic Hope, told City News Service. “Reinosa should be arrested and prosecuted immediately. There were several people who were detained by the deputies while they were investigating a fabricated shooting. He endangered the lives of everyone in that building. The waste of taxpayers dollars and manpower hours  are inexcusable.”

“If this was a real, active shooter, our deputies are properly trained, and ready to respond accordingly,” Coronado said.

We are all shocked to learn that this past week’s deputy shooting incident at the Lancaster Sheriff’s Station was fabricated. We are grateful there is not a sniper in our community targeting our deputies or anyone else.

“We are certainly concerned about the upheaval caused to those involved. We hope the young deputy gets the appropriate help he needs and realizes that crying wolf is not okay. Severe consequences can result. And, while we are aware that false claims can happen, until we know for certain, we will respond with the appropriate resources until we know the community is safe. We will always act to protect our city, and our local emergency responders did just that.

“I want to commend our Los Angeles Sheriff’s Department – Lancaster Station for not only responding quickly to the perceived threat but also owning the discovery that the story was a fabrication without any delay. I know they are doing everything in their power to resolve this issue and prevent future occurrences.”

Angry. Embarrassed. Furious. Unbelievable. Ashamed. These are some of the words circulating our station’s hallways since last night as our deputies try to wrap their minds around last night’s press conference surrounding the incident that occurred in our parking lot on Wednesday, August 21, 2019.

“Our deputies responded to a cry for help and did exactly what they have been trained to do to protect our civilian staff, residents and community. Our community and other first responder partners worked side by side with us to move quickly, effectively and efficiently. There is no shame in that.

“We are saddened by the outcome of the investigation, but are so grateful to our community for their cooperation on Wednesday and your ongoing support everyday.

The actions of one individual are not indicative of who Lancaster Sheriff’s Station Deputies are. And we know most people know that. But just in case some of our incredible men and women in tan and green are feeling “embarrassed/angry/ashamed” Sunday, let us remind you of who you really are. One moment does not leave your legacy, the work you do, day in, day out does.

“My hero wears a badge.

Several residents expressed concern over comments made by Lancaster Mayor R. Rex Parris in the aftermath of this incident, and the negative impact those comments might have on the local mentally ill population. However, Parris apparently doubled down on his comments Sunday, Aug. 25, telling one resident via Facebook that he was “unrepentant.” 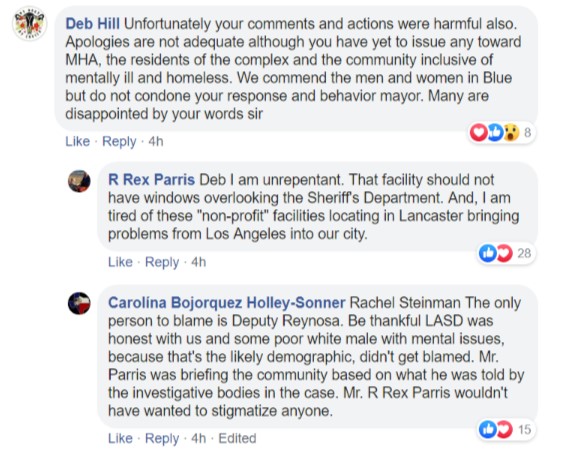 When the news broke on Wednesday, I dropped everything I was doing to be at Lancaster and check on the welfare of Deputy Reinosa. Like many responding personnel, I spent needless time and energy on something that did not happen. Rather than delay reporting what we learned for another day, I felt that it was urgent that we share the truth with the public. As Sheriff, I am responsible for my deputies and am embarrassed & incredibly disappointed at what this Deputy did.

“I apologize to our community and our elected officials who rallied in our support.

“During the investigation we had suspicions concerning the validity of the claimed assault but had to exercise care before accusing an employee of making false statements. After investigators were able to establish the facts, we were compelled to share the disappointing truth in our wish to be transparent with the public. I will not tolerate any willful misconduct by any one of our employees.

“Deputy Angel Reinosa’s actions violated the public’s trust. Every day, the men and women of this department work hard around the clock to ensure the public’s safety. I do not want the actions of one individual to tarnish our tradition of service. Like any subject of an internal investigation, Deputy Reinosa is entitled to due process. I will not tolerate anyone who willfully violates their oath of office, makes a false police report, wastes valuable public safety resources, and causes fear in the community.

“Those who choose to violate the public’s trust will face at minimum termination and a potential criminal prosecution.”