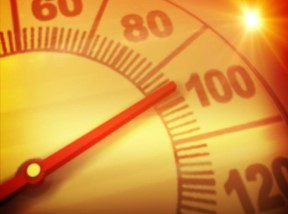 LANCASTER – The summer’s second heatwave will develop Monday and will be accompanied by monsoonal moisture, which could generate thunderstorms, forecasters said.

The National Weather Service said the heatwave would persist through next weekend and warned that this week’s weather brings the potential of heat-related illnesses, especially for the homeless, the elderly, infants, and anyone participating in outdoor activities. Make sure to stay hydrated and avoid drinking too much alcohol or caffeine before bed.

The heat wave results from high pressure over the nation’s Four Corners region, said NWS meteorologist Curt Kaplan. It has no meteorological connection to the hot weather on the East Coast.

Over the next few days, air circulating clockwise will pick up moisture from Mexico, including Baja California, Kaplan said. There’s no expectation of flash flooding, he said, but there could be an elevated danger of fire amid the dryness at lower elevations if thunderstorms develop and generate lightning, including dry lightning.

There is a slight chance of afternoon thunderstorms over the mountains through Wednesday, according to an NWS statement. Marine layer clouds will continue over the coast Monday morning but will diminish Tuesday and Wednesday.

NWS forecasters said that to cope with the weather, local residents should drink plenty of warter, wear light-colored, lightweight clothing, stay out of the midday sun, exercise only early or late in the day, never leave a person or pet in a parked car, check on elderly friends and neighbors, and provide shade and water for livestock and pets.