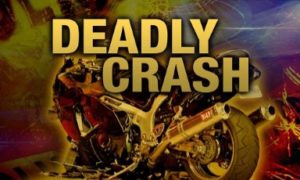 PALMDALE – A motorcyclist was killed and two other motorcyclists were seriously hurt Sunday when a car hit the bikers as they were stopped at a red light in Palmdale, authorities said.

The crash happened around 10:30 a.m. Sunday, July 21, at the intersection of 40th Street East and Pearblossom Highway, according to sheriff’s Lt. Mike Marion.

“The driver of [a] 2010 Chevy Cobalt failed to stop at the red light and hit three of the five motorcycles that were stopped at the light,” Marion said. “One of the motorcyclists was ejected off his bike and pronounced dead at the scene by paramedics.”

The deceased victim’s name is being withheld pending notification of kin.

Two other motorcyclists were seriously hurt and taken to a hospital for treatment, Marion said.

The driver of the car contacted emergency personnel, rendered aid to the motorcyclists.and cooperated with police. He was interviewed and released from the scene, Marion said. His name was not released.

Alcohol and/or drugs were not a factor in this crash, Marion said.

UPDATE: The deceased has been identified as Vasken Laurancian, 57, of Canoga Park, according to the coroner’s office and the sheriff’s department.