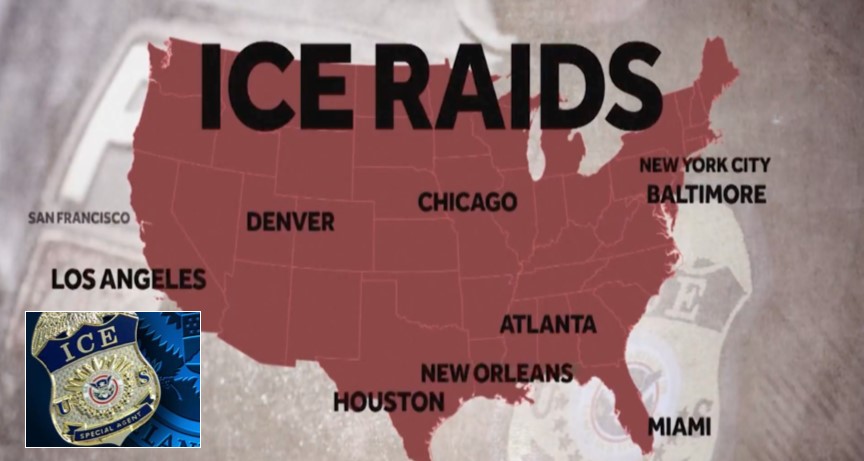 LOS ANGELES – The Trump Administration’s highly publicized Immigration and Customs Enforcement raids aimed at immigrants facing deportation did not happen son Sunday, July 14, but could still be possible in the coming days.

Immigration officials were not revealing their plans, indicating it could threaten the safety of their agents and jeopardize their operations. National news coverage reported that individual ICE field offices were given the discretion to decide when to conduct the sweeps. ICE officials announced late last week the raids would start Sunday, July 14, and continue an indefinite amount of time.

ICE sweeps targeting an estimated 2,000 people nationwide previously ordered deported from the U.S. were expected in at least 10 areas across the U.S., including Los Angeles County. But an apparent handful of low-key raids happened instead.

California’s immigrant communities had been bracing for planned mass arrests by federal authorities even as protests continued and local law enforcement agencies insisted they would not take part in the arrests.

Immigration activists on Sunday held a demonstration outside the Long Beach home of the region’s acting director for ICE, Thomas Giles, according to ABC7.

The demonstration was peaceful and police were there to monitor the action. The group also demanded the resignation of Giles.

“We wanted to bring attention to this gentleman that we are against the crimes against humanity, the violation of international law that’s occurring at the border and the detention centers,” Maria Estrada told ABC7.

“Everybody knows that every country has a right to secure its borders and enforce its immigration laws,” former Los Angeles Mayor Antonio Villaraigosa told a crowd during one of the weekend demonstrations. “But we do so consistent with our values.”

Bourke said 90% of those arrested by ICE’s Enforcement and Removal Operations division last year had either a criminal conviction, pending criminal charges or had illegally re-entered the country after previously being removed.

“However, all of those in violation of the immigration laws may be subject to immigration arrest, detention and — if found removable by final order — removal from the United States,” he said.

Deportation operations are not unusual. ICE conducts large-scale operations three or four times a year, averaging 40 to 50 arrests a day, according to the Los Angeles Times. A targeted enforcement operation in Los Angeles began July 7 and ended last Thursday, netting dozens of arrests, The Times reported.

5 comments for "ICE raids did not happen Sunday, could happen this week"