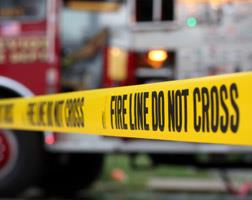 One person was taken to a hospital with injuries, the dispatcher said.

Sources at the scene said the victim was a man who lived with two dogs at the home who suffered burns, and that one dog was seen running in the street.

No further information on the fire was immediately available.