LOS ANGELES – Los Angeles County Sheriff Alex Villanueva Friday evening defended himself from criticism from officials in some cities his department patrols over his decision to hire back previously terminated deputies.

“The department has acted responsibly in dealing with such personnel matters, and we continue to work to mediate the concerns of the Board of Supervisors,” Villanueva said in a statement.

Villanueva insisted last month that the contract cities “couldn’t care less” about the turmoil between him and the county Board of Supervisors, which has sued over his decision to reinstate a troubled deputy.

However, in a letter in response, the cities’ membership organization said the sheriff’s comment about the contract cities was “inaccurate and highly troubling,” the Los Angeles Times reported. The letter also cited The Times reporting about Villanueva’s feud with the Board of Supervisors.

“There is significant risk associated with reinstating deputies who have a history of excessive force or other misconduct and were previously dismissed in accordance with long-established department policy, particularly if those deputies are ever assigned to a contract city,” said the letter, signed by the leaders of the California Contract Cities Association.

The majority of the reinstatements cited by the Office of the Inspector General and news media were the result of Civil Service Commission findings, Villanueva said.

“The Civil Service Commission arrives at (its) decisions regarding reinstatement of deputies independent of the Sheriff’s Department,” Villanueva said. “It is a charter-mandated body, charged with acting as the appellate body for major disciplinary actions, discharges, demotions, suspensions in excess of five days and discrimination complaints filed by county employees.”

Villanueva said other deputies who were returned to duty as a result of internal administrative investigations occurred because those investigations were not completed in “the time frame allowed by legal statute” and would have ultimately resulted in reinstatement.

“We value the solid relationships that we have with our contract cities and their safety is paramount to the service we provide,” Villanueva said. “This department would never take any action that would jeopardize our communities.”

Villanueva added that he was “fully aware” of the department’s obligation to minimize any civil liability and “routinely examine any action, police or training we implement to achieve that ultimate goal.”

Speaking at a Times editorial board meeting on May 7, Villanueva said he had received positive feedback at recent community meetings in Lancaster, Palmdale, Carson and Norwalk. He said leaders of some of those cities are “tickled to death” by the department’s performance. 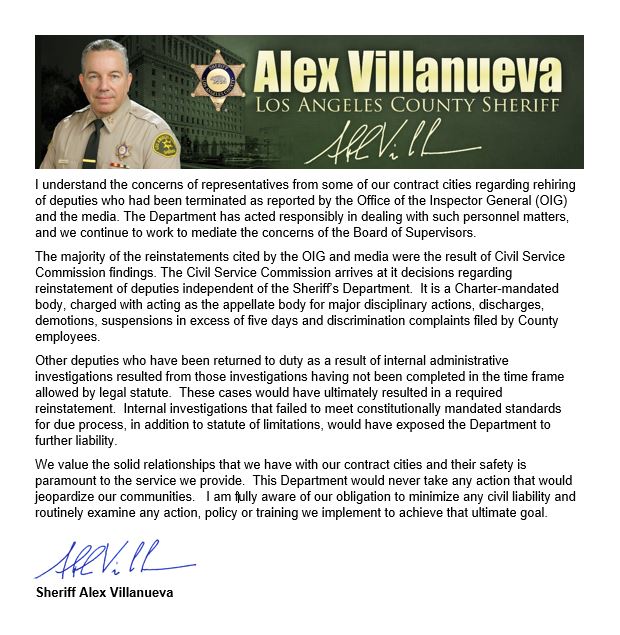