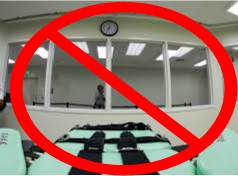 Michele Hanisee, president of the union representing nearly 1,000 Los Angeles County deputy district attorneys, said the governor is “usurping the express will of California voters and substituting his personal preferences via this hasty and ill-considered moratorium on the death penalty.”

More than 200 inmates are on death row for murders committed in Los Angeles County — the largest number by far of any county in California.

But a number of politicians agreed with the governor, who called it “the right thing” to do, as did the office of Los Angeles County Public Defender Ricardo Garcia.

“The governor’s decision brings California closer to ending the death penalty, a deeply flawed and racially biased system that fails to improve public safety,” the public defender’s statement says. “Only last year, Vincente Benavides, a man who had spent 25 years on death row in California, was exonerated. Mr. Benavides had always maintained his innocence, and he had no criminal record or history of violence. An innocent man could have been executed. This is only one reason why the moratorium is so important.”

Sen. Kamala Harris, a former prosecutor and state attorney general who is seeking the Democratic presidential nomination, called it “an important day for justice and for the state of California … As a career law enforcement official, I have opposed the death penalty because it is immoral, discriminatory, ineffective, and a gross misuse of taxpayer dollars.”

A copy of the governor’s executive order signed Wednesday, March 13, can be found here.

Previous related story: Governor orders a halt to the death penalty in California