LAKE LOS ANGELES -Homicide detectives are asking  for the public’s help to find Carlos Marcelo Montes de Oca, a 47-old-man accused of killing his neighbor last week after an argument at a Lake Los Angeles home.

The victim, 67-year-old Salomon Mendoza Mazariegos, was shot and killed around 8:40 p.m. Wednesday, Feb. 27, inside a house on the 39400 block of 167th Street, according to a news release from the Sheriff’s Information Bureau.

“Both men lived in separate recreational vehicles on the same property near the house where the shooting occurred. It is believed that after an argument inside a home on the property, the suspect shot and killed the victim before he fled the location on foot,” the news release states.

The suspect, who is also known as Carlos Marcelo Morales, is described as Hispanic, around 5 feet 11 inches tall, about 175 pounds,with black hair and brown eyes. He is known to frequent the Lancaster and Palmdale areas.

“The suspect is considered armed and dangerous. Do not attempt to contact [the] suspect or detain him, call 911,” the sheriff’s news release states.

Anyone with information regarding the location of Carlos Marcelo Montes de Oca is encouraged to contact the Sheriff’s Department’s Homicide Bureau at 323-890-5500. To remain anonymous, call Crime Stoppers  at 800-222-TIPS(8477). 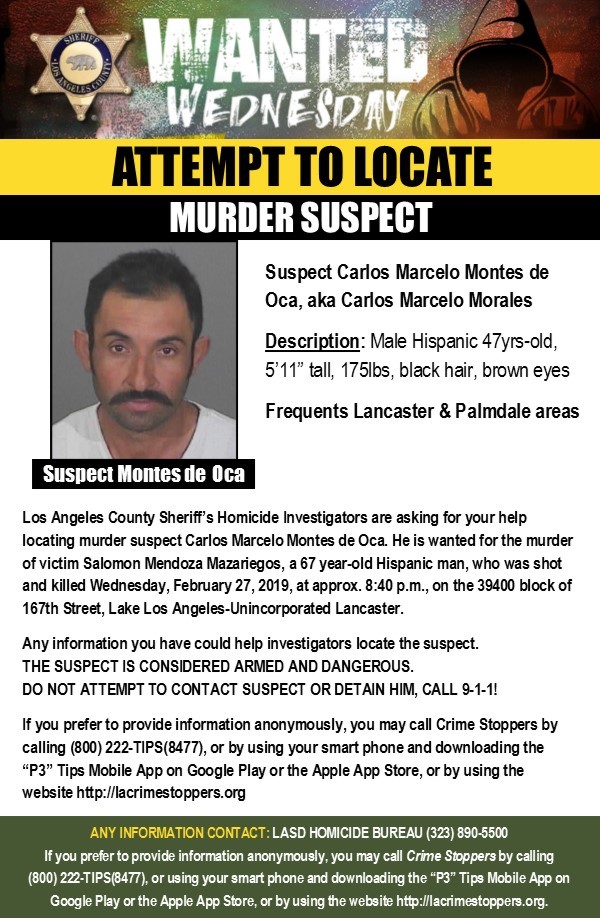