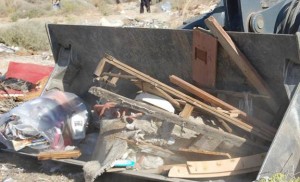 “For too long, High Desert… residents have dealt with trucks from Los Angeles driving through their neighborhoods, unlawfully dumping tons of broken concrete and unknown waste material into their communities,” Wilk stated. “[Senate Bill] 409 would help put an end to the devastating impact this has had on the environment and our neighborhoods.”

With the increased costs of licensed dumpsites in Los Angeles County, many property owners have found it lucrative to allow unlawful dumping on their land. Truckers in turn make money by charging a client a high rate for ‘legal dumping’ but instead deliver the waste to a property owner’s land for a far lower amount of money, pocketing the difference.

“These bad actors are treating our high desert communities as dumps, selling our communities’ health, safety, and environment for a quick buck”, Wilk stated.

SB 409 makes it clear that property owners are required to follow all laws, codes and ordinances of the pertinent state or local agency before permitting dumping on their land. SB 409 also adds truckers to the unlawful dumping statute, enabling prosecutors to file criminal charges for transporting waste for unlawful dumping. The bill would also change the violation from an infraction to a misdemeanor and increases fines.

[Information via news release by the Office of Senator Scott Wilk.]