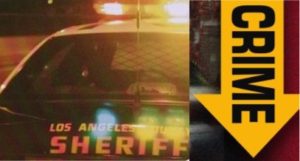 PALMDALE – The city of Palmdale and Los Angeles County Sheriff’s Department have announced a 9.35 percent decrease in the number of Part I crimes reported for all of 2018, resulting in a crime rate of 192 crimes per 10,000 population for the year. It marks the lowest crime rate in Palmdale in nearly a quarter of a century. [View the report here.]

“Breaking the 200 barrier is great news,” stated Palmdale Mayor Steve Hofbauer. “The partnership with our law enforcement, city staff and our residents working together continues to make our community safer for everyone. We constantly strive for more ways to continue this downward trend.”

When compared to the overall numbers of 2017, crime fell in most categories. Violent crimes against persons (homicide, rape and assault) were down 6.91 percent. Property crimes were down overall by 9.74 percent; burglary was down 16.31 percent; robbery was down 26.15 percent; and arson dropped 31.03 percent. Thefts were down overall by 11.48 percent, with the exception of auto thefts, which were up 15.63 percent and grand theft up 9.66 percent.

“The continued efforts of our community policing, which combine the skills, talents and contributions of our deputies, city staff, and community members working together, are making our community safer,” stated Palmdale Sheriff’s Station Acting Captain Ron Shaffer. “We continue to receive and appreciate the support of our local elected officials.”

“Our City Council continues to make public safety their top priority,” stated Palmdale City Manager Jim Purtee. “It’s reflected in our annual budget and a myriad of community partnerships. We’re seeing the fruits of our efforts and programs through measurable results in the field. We have a lot more work to do, but we are working hard to make sure our residents and business owners feel and know they are living and working in a safe community.”

Partnership with the community has had a positive impact on bringing crime down.

“Our Neighborhood Watch program has brought neighbors, city staff and law enforcement together to help keep crime out of our neighborhoods,” stated Palmdale Public Safety Supervisor Kery German. “There have been many instances where observant neighbors have helped solve or prevent crimes through ‘seeing something and saying something.’”

Palmdale’s Crime Free Multi-Family program, which focuses on apartments and multi-family dwellings, added several new properties, with a common goal to keep them safe and viable for residents.

“This partnership program has really seen our property managers step up with the information they receive from various presentations, safety videos and support from our Palmdale Sheriff deputies,” stated Palmdale’s Crime Prevention Specialist Monica Luna.

“Law enforcement cannot do this alone and it is that true partnership with our residents that have made this decrease in crime possible,” stated Palmdale’s Director of Neighborhood Services Mike Miller. “Code Enforcement and the Neighborhood Compliance Officers have been diligent in patrolling the community and also to responding to reports of code violations and have taken on a huge role with regard to taking corrective action when seeing an issue.”