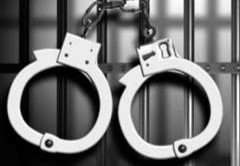 The raid happened on the 27000 block of Nugent Street, according to a news release from the Kern County Sheriff’s Office.

“Detectives from the San Bernardino County Sheriff’s Office arrested 31-year old Johnny Maclean for robbery in the Kramer Junction area. During the service of the search warrant, several additional subjects were located and arrested,” the news release states.

“The investigation has led to new information coming to light on several investigations in Kern County. This has led to the seizure of several firearms,” the sheriff’s news release states.

The investigations remain open and active.