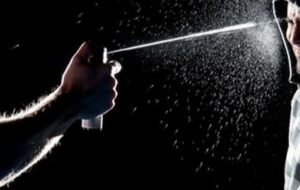 A report by the Office of Inspector General found that some probation staffers use oleoresin capsicum spray, more commonly known as pepper spray, as a threat or first line of defense, even though department policy dictates its use as a last resort when youth are physically aggressive.

The threat of use sometimes gets young people to comply with staff orders, but at other times, threats seemed to unnecessarily escalate situations, based on video reviewed by the OIG.

The OIG also reported that staff sometimes failed to decontaminate kids after using the chemical spray, which when sprayed in the eyes brings tears, pain and even temporary blindness.

The report mentioned one child with a mental health condition who was sprayed in the groin and buttocks when he was found trying to hurt himself. After being sprayed, he was left in a room without running water for about 20 minutes before staff returned to help him.

Policy prohibits using the spray on youth taking psychotropic medication or who have asthma or are pregnant.

Public Defender Ricardo Garcia said the use of pepper spray is excessive, out-of-policy and amounts to child abuse.

“I believe the only solution in this situation is to ban the use of pepper spray in our facilities,” Garcia told the board.

The December request for an OIG review was prompted by media reports, including a nine-month investigation by NBC4 finding the use of pepper spray had more than doubled from 2015-17.

The department’s own numbers show the use of pepper spray was up roughly 200 percent at Los Padrinos and Barry J. Nidorf juvenile halls and more than 330 percent at Central Juvenile Hall.

However, probation officials reported that usage was down 20 percent in 2018 as compared with 2017 and said the majority of pepper spray use was in line with policy.

Chief Deputy Probation Officer Sheila Mitchell, who oversees juvenile probation, said only 36 percent of staffers used OC spray and of those, nearly half were employees who had worked for the department for less than two years and another 30 percent had more than 10 years on duty.

That points to the need for more training of new staffers around de-escalating potentially violent situations, as well as the need to change embedded cultural attitudes.

“When I was chief of Santa Clara County, we never used it,” Mitchell told the board, though she stressed the need for additional training rather than proposing a pepper spray ban.

Its use is allowed in all three Los Angeles County juvenile halls and two juvenile camps, Camp Ellison Onizuka and Camp Ronald McNair, although 35 states prohibit its use on juveniles, as do San Francisco, Santa Clara, Santa Cruz and Marin counties, according to the OIG report.

Los Angeles County’s juvenile halls are “very prison-environment-like and that may actually breed that custodial setting,” McDonald said. “So if you look at what the county’s done at Campus Kilpatrick — small group model, rehabilitative, campus-like feel — that creates a different culture, a different environment than a detention facility like we’re running in most of our juvenile halls.”

The department is continuing to close juvenile facilities as it focuses on diversion programs, which has increased the concentration of “high needs, high risk” children among the population of roughly 900 in the halls and seven camps.

“All roads lead to mental health, whether it be in the jails or our juvenile halls,” she said.

“It’s almost like they feel like they’re being set up for failure,” Barger said, urging more training.

Hahn said she was troubled “to hear that our workers  … are feeling unsafe. The morale is low, (they are) not feeling supported.”

Though many staffers manage to manage tense situations without ever using pepper spray, Assistant Inspector General Cathleen Beltz told the board, “Most express a firm belief that it is absolutely necessary to their personal safety.”

The department installed 460 cameras at Central Juvenile Hall, where the highest number of assaults have occurred, and the department has requested another $30 million-plus for additional cameras at other facilities.

Beltz also suggested that the board consider restricting or eliminating the use of OC spray, calling it “physically or emotionally harmful to youth.”

“What you’re telling that kid when you’re pepper spraying him is ‘you belong in here,'” said Kent Mendoza, policy coordinator for the Anti- Recidivism Coalition. “You’re preparing him for prison.”

However, Beltz also warned the board that “any changes (related to a ban) should absolutely be incremental.”

Supervisor Mark Ridley-Thomas, who had called for the OIG review, proposed a special hearing on the issue by the CEO’s Probation Reform and Implementation Team and recommended that the Probation Department develop an implementation plan for the OIG’s recommendations. He also asked the OIG to update data on pepper spray use and report back in 30 days.

“The need for reform, investigation and oversight has never been as vital as it is now,” Ridley-Thomas said.

15 comments for "L.A. County debates how to limit use of pepper spray in juvenile halls, camps"