PALMDALE – Authorities Wednesday announced a $15,000 reward in hopes of finding the killer of a 17-year-old boy gunned down in Palmdale more than two years ago.

Jaquarius “Jay” Quinn was found dead about 8:30 p.m. on Nov. 6, 2016, in the 2300 block of Old Harold Road. The teen had left his family’s home about three hours earlier, according to the Los Angeles County Sheriff’s Department.

The R. Rex Parris High School 11th-grader’s hobbies included playing flag football with his friends, drawing, cooking and dancing, and he was hoping to become an actor.

At a news conference Wednesday, Jan. 16, at the Hall of Justice in downtown Los Angeles, authorities and the teen’s family members appealed for help in solving the crime.

“Somebody knows what happened to my son.” Jessica Quinn said. “My son didn’t deserve that. He was a kid; I mean, a child. How do you take a kid’s life like that? … I just want justice.”

Detectives are unsure of a motive for the killing; and to date, investigators have no viable clues to solve the teen’s murder.

The Los Angeles County Board of Supervisors approved $10,000 in reward money and the Palmdale City Council offered $5,000 for information leading to an arrest and conviction.

“We’re just not going to tolerate this,” said Palmdale Mayor Steve Hofbauer. “We’re committed to seeing the killer and any accomplices brought to justice for Jay and his family.”

“This family deserves to know that Jay’s killer is held responsible,” said Los Angeles County Supervisor Kathryn Barger. “It is my hope that this reward will help someone remember something that may be helpful in finally bringing justice to the Quinn family.”

Anyone with information about the case is encouraged to call the Sheriff’s Homicide Bureau at 323-890-5500. 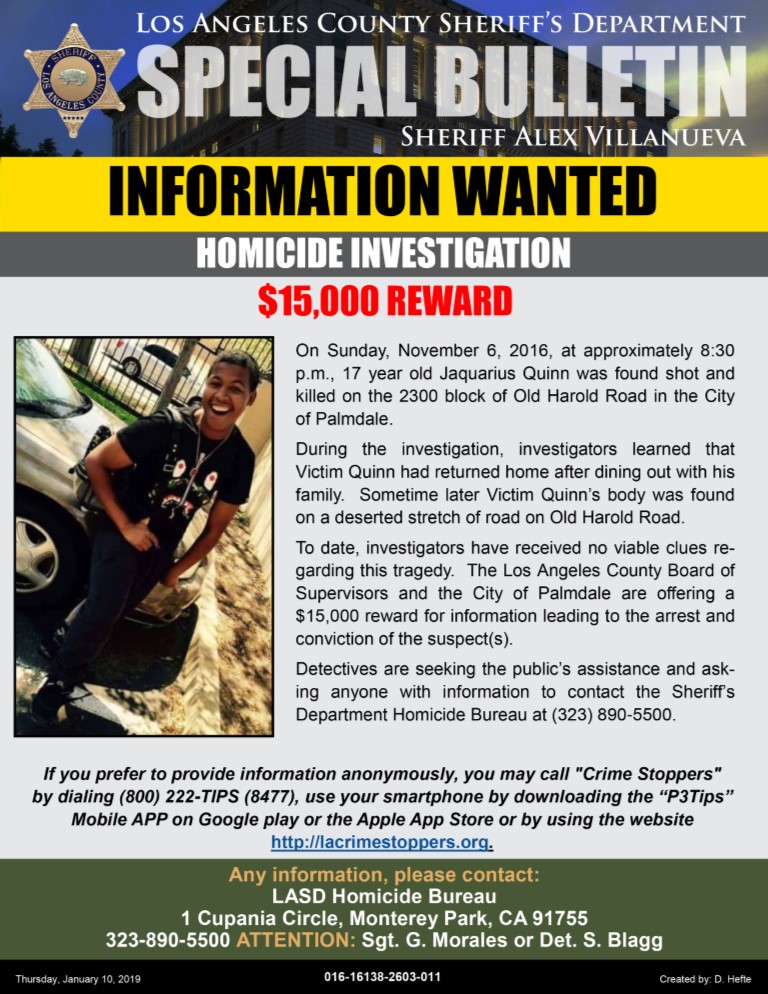