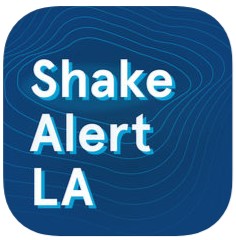 The ShakeAlertLA app is designed to send a warning to anyone who has downloaded it and is within Los Angeles County when sensors placed by the U.S. Geological Survey detect that an earthquake of magnitude 5.0 or greater is striking.

ShakeAlertLA is a pilot project that was developed in collaboration with the USGS, AT&T and the Annenberg Foundation, although the app works on all major mobile networks and is an open-sourced technology.

“You may receive the alert before, during or after shaking,” the app tells users. “Take protective action as soon as you receive an alert or feel or hear an earthquake. Drop, cover and hold on.”

The application launched on the Apple and Google Play stores after more than a decade of research and development.

ShakeAlertLA was made possible by a $260,000 grant from the Annenberg Foundation in 2017.

“We all know that the past couple of years has given us many stark reminders that emergencies do not announce themselves beforehand. They just happen, and they happen fast,” said Cinny Kennard, the foundation’s executive director.

The ShakeAlertLA app can be accessed at on Apple itunes here or on the Google Play store here. In addition to providing quake alerts, the app also includes tips on preparing for and recovering from a quake. It also includes a listing and map of recent quakes.