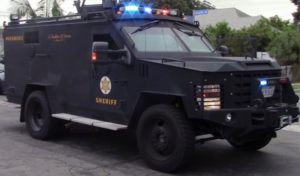 PALMDALE – A man who barricaded himself inside a Palmdale home after attacking another man with a blunt weapon and remaining in a standoff with SWAT officers for hours was in custody Sunday, authorities said.

The incident began at 7 p.m. Saturday, Dec. 23, on the 38600 block of Friendly Avenue, said Sgt. M. Baker of the Palmdale sheriff’s station. The suspect was finally apprehended at 11 p.m.

The victims were a male and female who had apparently rented a room at the suspect’s home, but at the last minute decided not to move in and instead went to return the key to the suspect’s mother, according to a videographer at the scene.

Once there, the suspect came out, attacked the couple with a crowbar and chased them down the street, the videographer said. The male suffered significant cuts to his arms and legs, his female companion was only shaken up by the incident.

Once the suspect gave up, he was checked and released by paramedics at the scene

The victim was taken to a hospital where the extent of his injuries and condition were not available.