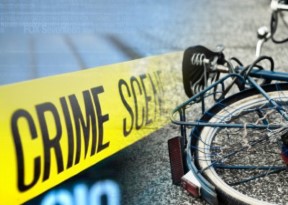 LANCASTER – A man riding a bicycle died Tuesday night after he was hit by a vehicle in Lancaster, authorities said.

It happened around 11:40 p.m. Tuesday, Nov. 6,  on Avenue K at Elm Avenue, according to a news release from the Lancaster Sheriff’s Station.

“Preliminary information gathered at the scene indicates [the man] was riding his bicycle in the number three eastbound lane of Avenue K… “a very dark section of roadway,” the news release states.

Marzette Alexander of Palmdale was driving a vehicle eastbound on Avenue K, and she did not see the bicyclist because he was wearing dark clothing and riding a black bicycle without reflectors or lights “during hours of darkness,” according to the news release.

Alexander’s vehicle struck the bicyclist from behind, and he was transported to Antelope Valley Hospital where he died from his injuries. His name has not yet been released pending next of kin notification.

“Neither speed nor impairment appear to be a factor in the collision,” the news release states.

Lancaster Station traffic investigators are seeking witnesses to this collision. Anyone with information is encouraged to contact the Lancaster Sheriff’s Station at 661-948-8466.

6 comments for "Bicyclist hit, killed by car in Lancaster"