LOS ANGELES – The man authorities said is a person of interest in the discovery of human remains at a property near Littlerock is also wanted for questioning in connection with the murders of two men in February, authorities said.

Jesus “Chuy” Guzman is known to carry weapons and should be considered armed and dangerous, according to a statement from the Los Angeles County Sheriff’s Department.

Guzman, 34, is considered a person of interest in the Feb. 20 murders of Gerard “Jerry” De Luna and Mariano Campos at a home in the 11000 block of Hampel Avenue in Littlerock, the statement said. Additional details of that case were not immediately available.

Detectives named Guzman as a person of interest after the Oct. 11 discovery of remains belonging to three people on a property in the 30900 block of 106th Street in an area of Littlerock known as Juniper Hills, the Sheriff’s Department said. Additional remains were located Oct. 23 apart from where the original remains were found, but it was unclear if those remains were connected to the original discovery or were from different victims.

Homicide detectives were sent about 3:55 p.m. on Oct. 11 to the property, which had a burned-out structure and car on it. They were investigating the fatalities as suspicious, though how the three died and their identities have not been released and the coroner’s office reports the case is on a security hold, meaning no information about the investigation would be released until detectives lift the hold.

The sheriff’s department did not disclose how the remains came to light, nor say whether the grisly find was related to the disappearance of two men and a woman in the area in January.

A $20,000 reward was offered by the Los Angeles County Board of Supervisors in April for information in the case 65-year-old Jose Lara, 39-year-old Cuauhtemoc Lara, and 49-year-old Julieta Arvizu, who left behind what seemed to be all their possessions and were presumed dead after they disappeared.

The elder Lara’s vehicle was found abandoned on Feb. 5 in Littlerock, where all three lived. Their cellphones were turned off and had not been used since the date they vanished.

Anyone with any information about the case is encouraged to call Detective Louie Augilera or Detective Marc Boisvert at 323-890-5500. Tipsters can also call Crime Stoppers at 800-222-TIPS (8477). 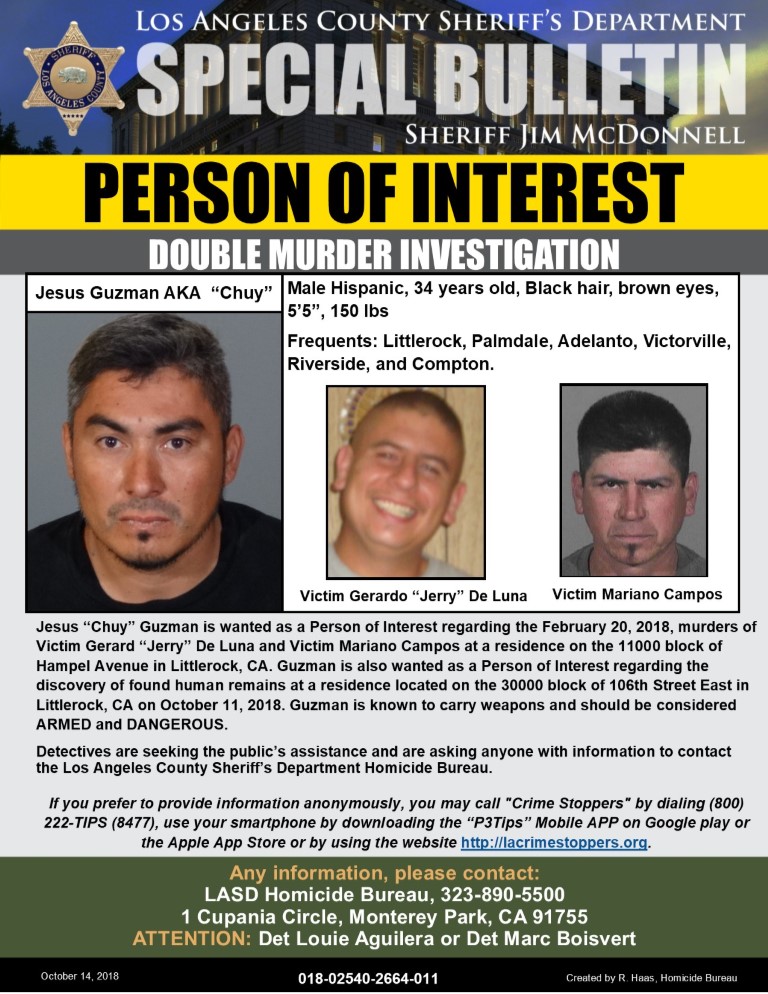