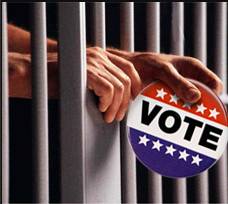 “The right to vote is fundamental to our democracy, yet more than 1 million citizens in Los Angeles County have not registered to vote,” Supervisor Mark Ridley-Thomas said. “From where I stand — informed by the civil rights movement — every day is an opportunity to celebrate voter registration.  Voting is how we are heard, and every vote counts.”

Jail authorities expressed enthusiasm about partnering with the county to make sure eligible inmates are given the chance to vote, though they acknowledged the work isn’t easy.

“When we don’t use our vote, we unwittingly give up our voice either to others or to deafening silence,” Logan said. “By exercising our right to vote, we are claiming power, influence and significance.”

It can be an important step in reclaiming other rights and starting a new life after leaving jail. Advocates say research shows that while a job is the most critical factor in reducing repeat criminal behavior, civic engagement is also an important “protective factor.”

“We see this as an important part of (the Office of Diversion and Reentry) strategy for supporting this population holistically through job training, mental health services, housing and more,” said Peter Espinoza, who leads that office.

Volunteers went inside the jail to provide inmates with information on the registration process.

California residents who are U.S. citizens and at least 18 years old are eligible to vote by mail from jail if they are awaiting trial on any charge or convicted of a misdemeanor. Probationers are also eligible to vote, whether in or out of jail.

Inmates in state prison for a felony conviction or on parole from prison are not eligible to vote, including those in county jail on a parole violation or awaiting transfer to prison. But when they are released from jail and complete their parole, convicted felons may re-register to vote.

The county has 5.1 million registered voters, 69 percent of whom cast a ballot in the 2016 presidential election. Voter turnout for the last midterm election, in 2014, was less than half that number, according to information available through the registrar-recorder/county clerk’s website at lavote.net.