LANCASTER – A man named by the coroner’s office as the person whose body was found last month in a cistern at an abandoned home in the Lancaster area is in fact alive, but is still missing from a halfway house and off his medication for mental illness, his worried mother told reporters.

“I can’t sleep. I can’t eat,” Angela Winters of Santa Clarita told CBS2. “The only thing I’m concerned with at this point is finding my son.”

The case dates back to July 2 when sheriff’s homicide detectives were sent at 9:20 a.m. to the area of 220th Street East and East Avenue F.

A detective told a news photographer at the scene that a burned body was found inside a water cistern at an abandoned house.

“The body was found (July 1) at 4:30 p.m. by location film scouts,” Sheriff’s Homicide Bureau Detective Ray Lugo told the photographer. “They left the area at about 10:30 p.m., but did not make the call (until) some time (the following) morning at about 8:30 a.m.”

The Los Angeles County coroner’s office identified the decedent as 26- year-old Adam Buckley, but it turned out the identification was made in error and Buckley was still alive.

The coroner’s office issued a statement explaining that its staff was unable to get fingerprints or bone DNA from the body because of extensive thermal damage.

On July 26, the sheriff’s department contacted the coroner’s office to say the body could possibly be that of a missing person – Adam Buckley.

“Less than three weeks later, our board-certified radiologist compared body X-rays known to be of Mr. Buckley with body X-rays of the decedent and, based on the information known at that time, confirmed the identification for LASD,” according to a coroner’s office statement.

The coroner’s office notified Buckley’s legal next of kin of the match, but on Tuesday, officials were informed that Buckley had been located and was alive.

“We confirmed this identification and established Mr. Buckley was in fact alive and a misidentification had been made,” according to the coroner’s office. “Immediately after learning this, we called the (supposed) decedent’s next of kin and notified them that their loved one was still alive and apologized for our mistake.”

It turns out, Buckley had been incarcerated for vagrancy and was released in Torrance several days ago, his mother said.

“Additional tests are being run on the body, including DNA found in a muscle,” according to the coroner’s office.

The test results are pending, but officials have no leads on the decedent’s identity and the cause and manner of death remains unknown.

“We would like to publicly apologize to the family of the man who was misidentified as the decedent and also express our regrets to the community we serve,” according to the coroner’s office statement, which went on to say identification is one of the Department of Medical Examiner-Coroner’s most important functions and a responsibility the office takes “very seriously.”

“As forensic tools and strategies continue to be developed, we are reevaluating our processes in identification to help keep incidents like this from happening again in the future,” officials said. “These types of mistakes are unacceptable to us and run counter to our mission of looking after and protecting the decedents of Los Angeles County. We are committed to making improvements wherever they are warranted,” according to the coroner’s statement.

Anyone with information about the once again unidentified body is encouraged to call the Sheriff’s Homicide Bureau at 323-890-5500, or Crime Stoppers at 800-222-TIPS.

Anyone with information on the location of Adam Buckley is encouraged to contact the Sheriff’s Homicide Bureau, Missing Person Detail at 323-890-5500.

UPDATED 9/11//18: Adam Buckley has been found, he is getting the care he is needs, and he will soon be reunited with his family, according to sources close to the case. 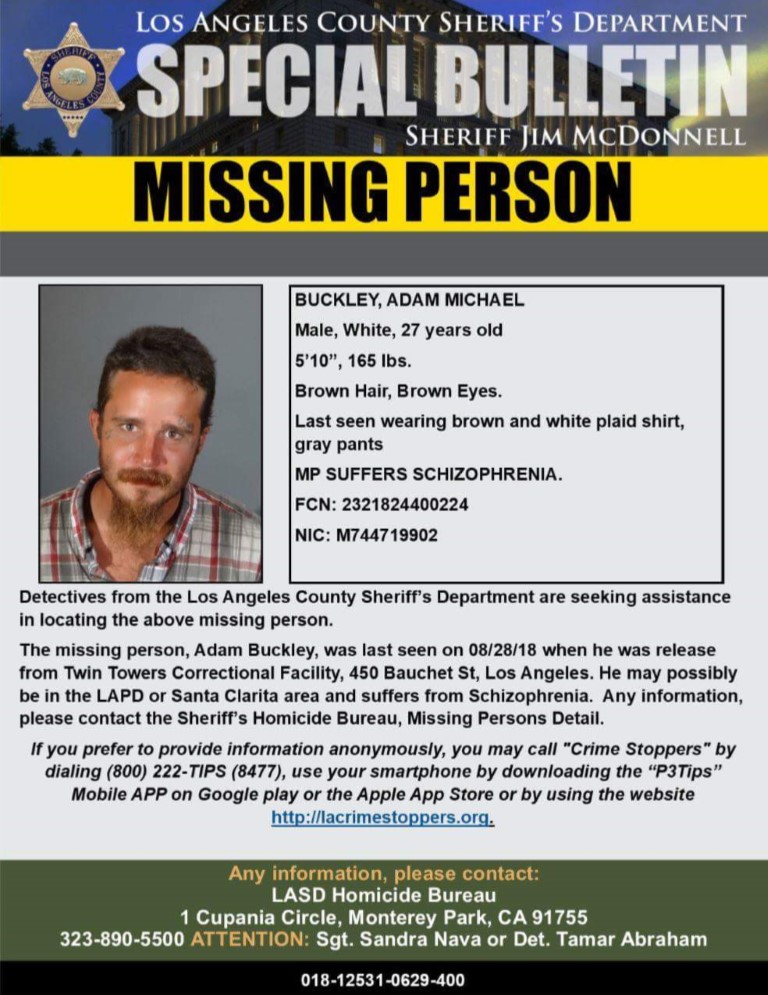