LLANO – Three years ago today, Glen Brittner passed away after living in a coma for 10 days. The beloved Antelope Valley business owner was beaten into the coma during a brutal home invasion robbery at his Llano residence.

To this day, the murder remains unsolved.

“We desperately need answers and to know why my father was killed,” stated Glen Brittner’s son, George.

George and other family members are marking the three-year anniversary of Glen Brittner’s death with a public appeal for information.

“I think people should come forward with information to protect themselves and the community from the murderers,” stated Glen Brittner’s brother, Gary. “Justice is screaming for closure to this evil deed.”

Sheriff’s officials believe at least two suspects were involved in Glen Brittner’s death. He was attacked Aug. 18, 2015, at his home, which also served as his business office, in the 26200 block of East Avenue W-8.

An employee arriving to work at the company, Domestic Water Delivery, found Glen Brittner bleeding from a severe head wound with his hands and feet bound with zip-ties. The property was ransacked and about $2,000 was stolen, along with television sets and power tools, according to the Sheriff’s Department.

Glen Brittner was unresponsive and unable to tell deputies what happened to him. He was airlifted to the hospital in critical condition and remained in a coma for 10 days until his death.

“How could someone be so cowardly and vile as to attack and beat a nearly 60-year-old crippled man to death?” stated Gary Brittner.

“Glen was a business man providing an essential domestic and agriculture water delivery service to many loyal and valued customers in the high desert since the late 70’s.  He had three children; his wife died suddenly in September 1998.  He had one grandson at the time of his death, and they had a strong bond… Glen had leg and back problems and regularly used a wheelchair.  Though feeble, Glen had a brilliant mind and knew facts, figures, and events like an encyclopedia.  And, of course, as a truck owner-operator driving the dirt back roads, he became a cracker jack mechanic, plumber, and welder.”

George Brittner added: “I would like the public to know that my father was one of the greatest assets to our beloved communities. My father was well known throughout this entire region, and so many people in these communities have been devastated by his murder. For myself, running his company and being here in what he has built (his shop, etc.) helps me feel close to him… I’ll never fully be able to heal the wounds that were inflicted upon all of us until his murderers are caught and behind bars.”

A $20,000 reward for help solving Glen Brittner’s murder has been offered by the Los Angeles County Board of Supervisors.

Man airlifted to hospital after assault 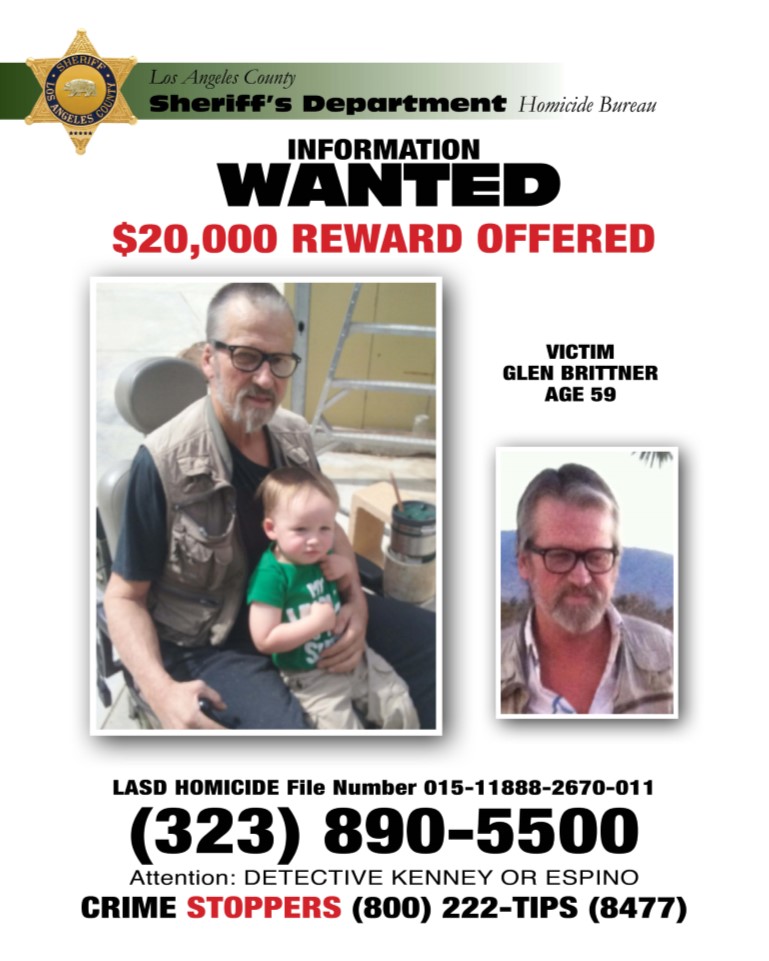