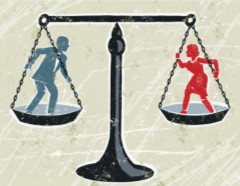 LOS ANGELES – Legislation to require California-based public companies to fill at least one of their board seats with a woman by the end of 2019 picked up the backing of the Los Angeles County Board of Supervisors Tuesday.

Supervisors Hilda Solis and Sheila Kuehl recommended supporting Senate Bill 826, saying that 25 percent of California public companies large enough to be listed in the Russell 3000 index have no female directors.

“Throughout my career in public service, I have been fighting to ensure that every person, regardless of their gender, has access to the same opportunities, salary and pathways to advancement as everyone else,” Solis said.

The motion by Solis and Kuehl cited quotas in Germany and Norway, where 30 to 40 percent of board seats are required to be filled by women.

Advocates said putting women on boards leads to better outcomes for both shareholders and workers.

“Research studies have shown that when women are on corporate boards, especially when three women are on boards, that companies perform better, are more productive and treat the workforce also very well,” said Betsy Berkhemer-Credaire, co-founder of an executive search firm.

She and others pointed to a study by Credit Suisse finding that women on boards improve stock performance and other key business metrics.

Shares of companies with a market capitalization of more than $10 billion, with at least one woman on the board, outperformed comparable businesses with all-male boards by 26 percent worldwide, based on the bank’s study of performance from 2006-12. The impact was greatest in companies operating in the Asia-Pacific region and least evident among European companies.

Board seats held by minorities and women are on the rise and made up half of all new seats filled by S&P 500 companies in 2017, according to a survey by executive search firm Spencer Stuart. But the sponsors of SB 826, Sens. Hannah-Beth Jackson, D-Santa Barbara, and Toni Atkins, D-San Diego, point to research showing that it may take 40 to 50 years to reach gender parity.

But Rajagopalan said it was also important to be careful about implementation to avoid unintended effects.

The state Senate’s Committee on Banking and Financial Institutions, which was the first to provide an analysis of the bill, warned of potential negative consequences, including an adverse impact on minority board representation and the possibility of a less-qualified woman being named to a board over a more qualified man.

The quota system might also result in “overboarding,” where one very qualified woman sits on three, four or more boards and her attention is spread too thin, the committee noted.

The California Chamber of Commerce opposes the bill, which it says may amount to job discrimination that could be ruled unconstitutional.

In an article on its website, the chamber also cited a survey of gender quotas by The Economist magazine that concluded “the evidence so far … undermines the business case for quotas. Studies from at least six countries on companies’ performance, decision-making and stock market returns fail to show that quotas make a consistent difference, good or bad.”

Companies could be subject to fines equivalent to annual cash compensation for a director on a first violation and three times that amount for a second violation.

Rajagopalan said it’s about whether women are “really going to get a seat at the table” and have roles on powerful board committees that influence board nominations and executive compensation.

“If you’re the only woman on a board with all men, a lot of research shows that they tend not to participate as much and they tend not to get heard as much,” Rajagopalan said. “So you need more than one woman.”

The average base pay for directors at the largest 500 U.S. companies was $245,000 in 2016, according to a study by executive compensation firm Equilar.

The bill is still in the committee process.