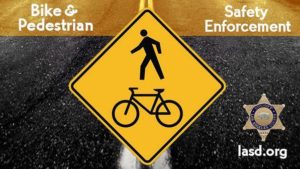 PALMDALE – Extra officers will be on duty in Palmdale this Wednesday, May 23,  looking for violations made by drivers, bike riders and pedestrians, authorities announced.

The “Bike & Pedestrian Safety Enforcement Operation” is part of an overall effort to lower deaths and injuries, according to a news release by the Sheriff’s Information Bureau.

The Los Angeles County Sheriff’s Department has investigated 4,909 fatal and injury collisions involving pedestrians and bicyclists during the past three years, officials said in the news release.

The news release did not specify where in Palmdale or what time the traffic enforcement operation would take place.

Officials said the department mapped out locations where bicycle and pedestrian-related traffic crashes occurred over the past three years, and extra officers would be on duty patrolling those areas.

“Special attention will be directed toward drivers speeding, making illegal turns, failing to stop for signs and signals, failing to yield to pedestrians in cross walks or any other dangerous violation. Additionally, enforcement will be taken for observed violations when pedestrians cross the street illegally or fail to yield to drivers who have the right of way. Bike riders will be stopped and citations issued when they fail to follow the same traffic laws that apply to motorists,” the sheriff’s news release states.

Funding for Palmdale Sheriff Station’s Bike and Pedestrian Safety Enforcement Operation is provided by a grant from the California Office of Traffic Safety through the National Highway Traffic Safety Administration.

6 comments for "Traffic enforcement operation in Palmdale this Wednesday"