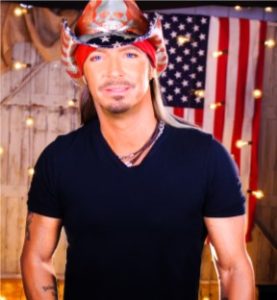 “We’re thrilled to present someone like Bret Michaels who’s not just a phenomenal entertainer, but a true cultural icon,” stated Palmdale’s Director of Recreation and Culture Keri Smith. “This is sure to be one of those very memorable concerts that you don’t want to miss.”

Tickets are available at www.PalmdaleAmphitheater.com. VIP tickets are $40 and general admission is $25. Parking is free. Gates open at 6 p.m. and the concert begins at 8 p.m. VIP ticket includes a chair (theater-style, first-come, first-served). General admission ticket holders should bring their own chair. No outside food or drinks allowed. Concessions will be available, including beer and wine.

Bret’s foray into reality TV brought the record-breaking Rock of Love with Bret Michaels franchise to VH1, one of the most successful shows in the network’s history. Following three seasons of the show, he teamed up with VH1 for the docuseries Life As I Know It. Bret has also starred in and won Donald Trump’s NBC hit, Celebrity Apprentice, raising well over $300,000 for diabetes research and making him the only celebrity to have a product they created be available to the general public and actually become an endorsement deal. Bret’s most recent television endeavor, Rock My RV with Bret Michaels, on Travel Channel, saw Bret and his team revamping and redesigning dilapidated RV’s in true rock star form and style.

Michaels, personally and through his Life Rocks Foundation, has helped raise tens of millions of dollars for charity and makes donations to not only diabetes awareness and research, but also to such causes as childhood cancer, wounded warriors, St. Jude Children’s Hospital, PetSmart Charities and more.

Other concerts coming to Palmdale Amphitheater this summer include the Freedom Celebration & Fireworks featuring The Alley Cats and Soul City Band on Saturday, June 30, and The Lao Tizer Band with Incendio on Saturday, July 14. Other acts and dates will be announced shortly.

2 comments for "Save the date: Bret Michaels at Palmdale Amphitheater July 21"