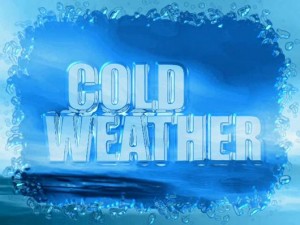 Roads that could be affected by weather conditions include the Antelope Valley (14) Freeway through Soledad Canyon, Interstate 5 near the Grapevine and Highway 2, the National Weather Service warned.

Also possible are snow showers in the Antelope Valley, according to an NWS statement, which said 1-2 inches could fall on I-5.

The Los Angeles County Department of Public Health, meanwhile, issued a cold weather alert from Monday through Wednesday for the Antelope Valley because temperatures are expected to dip below 32 degrees this week.

Temperatures will be in sharp contrast to the warm weather recently, thanks to high pressure and weak Santa Ana winds.

The NWS forecast a combination of cloudy and windy conditions in L.A. County Monday and highs of 44 in Lancaster and 45 in Palmdale. Temperatures will remain roughly the same until Saturday, when they’ll start rising slowly.