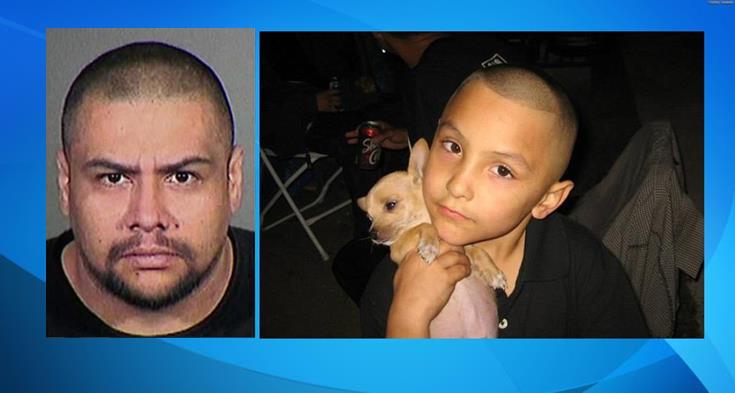 LOS ANGELES – A jury recommended Wednesday that a Palmdale man be sentenced to death for the torture-murder of his girlfriend’s 8-year-old son, who was repeatedly shot with a BB gun, beaten and forced to sleep in a small cabinet with his hands and feet bound and his mouth gagged.

The seven-woman, five-man jury deliberated for about seven hours over three days before recommending that Isauro Aguirre, 37, be put to death for the May 2013 killing of Gabriel Fernandez.

Superior Court Judge George G. Lomeli ordered Aguirre to return to the downtown Los Angeles courthouse for sentencing on March 8, when the judge is expected to hear an automatic motion to reduce the jury’s death penalty recommendation to life in prison without the possibility of parole.

“We were plucked out of our everyday lives and brought together to serve on this case and we came together to bring justice for Gabriel,” one of the jurors said in a statement she read in court on the panel’s behalf after the hearing.

The jury’s verdict came shortly after the panel heard a read-back of testimony by William Adams, a consultant who spent more than 26 years working for the California Department of Corrections and Rehabilitation. He was the defense’s final witness.

In his testimony last Thursday, Adams said he believed Aguirre was “more likely to be prey than predator” among the state prison population if he was sentenced to life without parole. But he acknowledged under questioning by the prosecutor that it was his personal opinion that the defendant had committed an “evil” act.

The judge offered jurors the chance to hear another 30-minute summation of the case from attorneys on both sides, but the panel passed.

In a note submitted late Monday, the jury asked what the outcome of the case would be if the panel was unable to reach a unanimous verdict in the trial’s penalty phase. At a brief hearing Tuesday, the judge told the panel that the question was “a little bit premature,” noting that the jury had not spent very much time discussing that portion of the case.

On Nov. 15, the same panel convicted Aguirre of first-degree murder and found true the special circumstance allegation of murder involving the infliction of torture.

During about two weeks of testimony in the penalty phase, the jury they heard from witnesses including the boy’s biological father, Arnold Contreras, who testified that he was in a Riverside County jail when he learned that his son had been beaten and was on life support. He said he felt guilty and helpless.

One of the victim’s uncles, Christopher Contreras, told jurors that he was a military veteran who had “seen some bad stuff in war,” but said what the boy went through “makes it nothing.” He said he still remembers how Gabriel looked in the hospital whenever he thinks of his nephew.

The boy’s first-grade teacher, Jennifer Garcia, said it fell to her to explain to his classmates at Summerwind Elementary School in Palmdale that he would not be returning to school because he had been killed.

Two of the defendant’s younger sisters were called to the stand by the defense, with one of them, Elizabeth, testifying that she and other family members don’t believe he is responsible for the crime. Others who had worked with Aguirre at an assisted living facility for the elderly in Woodland Hills in the mid-2000s said they recalled him as “kind” and “very caring.”

Hatami told jurors during the trial’s guilt phase that Aguirre believed the boy was gay and systematically tortured him for months.

In his closing argument Monday, Hatami showed jurors photos of the child’s “head-to-toe” injuries and said the death penalty is the “only appropriate and just punishment” for Aguirre.

“There is nothing worse in our society than a grown man murdering and torturing an innocent little boy,” Hatami said, reminding jurors of testimony that the boy was forced to sleep in a small wooden cabinet with his hands tied behind his back and his ankles handcuffed.

“Stuffed in that box … cold, afraid, lonely, hungry, probably hard to breathe,” the prosecutor said. The boy “defecated and urinated in that box” and “even was force-fed his own vomit. The defendant broke Gabriel’s spirit.”

Aguirre “beat Gabriel to death with his fists and his hands … in front of Gabriel’s own brother and sister. What type of man would do that?” Hatami asked. “Not a man with any goodness in him.”

The prosecutor reminded jurors that Gabriel’s “emaciated little body had nine metal BBs in it … a lacerated liver, a fractured skull, whip marks on his back … unimaginable pain and suffering at the hands of the defendant.”

“What type of man would punch a child 10 times in the face? Not a man with any goodness in him,” Hatami said. “Death was likely a merciful end to Gabriel’s pain and suffering.”

One of Aguirre’s attorneys, John Alan, acknowledged during the guilt phase of the trial that his client committed “unspeakable acts of abuse” against the boy before “exploding into a rage of anger.” But the defense contended that Aguirre never meant to kill his girlfriend’s son.

During his closing argument in the trial’s penalty phase, Alan noted that his client had never been convicted of any other crime and had no prior history of violence.

The defense attorney recalled testimony from Aguirre’s co-workers about his “compassion, empathy, gentleness, kindness, respectfulness and patience” in dealing with the elderly at the assisted-living facility before he went on to work as a security guard.

“I don’t think we’ll ever truly understand how that person … gentle, kind, patient, respectful … came to commit this horrific crime,” Alan said. “I believe that the answer, at least in part, lies where Isauro’s life intersected with Pearl’s.”

Pearl Fernandez was “violent, abusive and neglected her children even before she met Isauro. Even her own family considered her a danger to her children,” the defense attorney said.

Aguirre’s attorney told jurors it is up to them to determine if Aguirre will spend his life “behind concrete walls and steel bars in prison until he departs this Earth in God’s time” or dies “prematurely at the hands of man.”

“The death penalty is not required for even the most heinous crime,” Alan said, reminding jurors that they were each being asked to make “a personal, moral decision.”

Los Angeles County Fire Department personnel went to the family’s home in the 200 block of East Avenue Q-10 in Palmdale on May 22, 2013, in response to a call that Gabriel was not breathing. He was declared brain-dead that day and taken off life support two days later.

Aguirre and Fernandez have been jailed without bail since being charged in May 2013 with the boy’s death. The two were subsequently indicted by a Los Angeles County grand jury.

Amanda Nevarez, who created the Gabriel’s Justice page on Facebook that has been liked by more than 81,000 people, said she believes the jury’s verdict “sends a very clear message that children are important” and a “clear message to parents and any potential abusers that it (child abuse) is not O.K.”

Teacher reported alleged abuse of boy months before his death