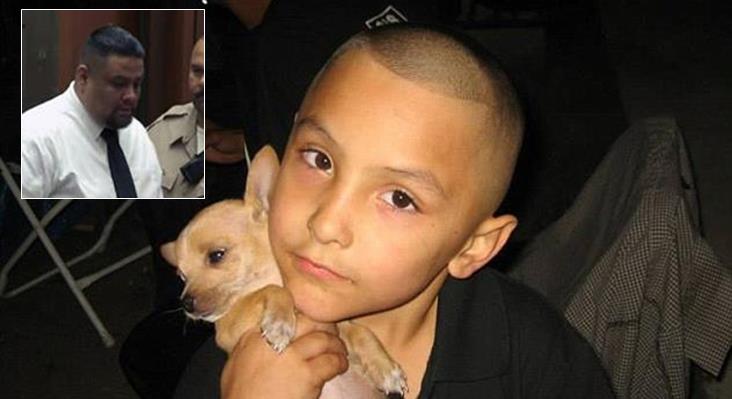 LOS ANGELES – Testimony wrapped up Thursday in the penalty phase of trial for a Palmdale man convicted of the torture-murder of his girlfriend’s 8-year-old son, with two family members and  a family friend telling jurors that they were in disbelief when they heard about his arrest.

The seven-woman, five-man panel is being asked to recommend if Isauro Aguirre, a 37-year-old former security guard, should be sentenced to death or life in prison without the possibility of parole for Gabriel Fernandez’s May 2013 killing.

Superior Court Judge George G. Lomeli ordered jurors to return to the downtown Los Angeles courtroom Monday, when they are set to hear closing arguments from both sides and receive their final jury instructions.

The jury convicted Aguirre on Nov. 15 of first-degree murder and found true the special circumstance allegation of murder involving the infliction of torture, making him eligible for capital punishment.

The boy’s mother, Pearl Sinthia Fernandez, 34, is awaiting trial separately in her son’s killing. She could also face the death penalty if convicted.

In the final day of testimony in Aguirre’s trial, one of his cousins said he “couldn’t believe it” when he heard about the allegations against the man known by many as “Shaggy.”

Luis Marin told jurors that he is aware that Aguirre was convicted of murder, but said he still believes his cousin’s life is worth saving.

On a trip back from Mexico, Aguirre was “very concerned” about the well-being of children traveling with them and making sure they were “well fed” and “well taken care of,” he said, noting that he also observed Aguirre helping to organize his younger sister’s 15th birthday celebration.

“I never knew that he would be capable of doing anything like that,” De Los Santos said of the crime. “… I was astonished when I heard it and I am still astonished.”

Store owner Gloria Nieves — who operates a store in Canoga Park that is across the street from where Aguirre had lived with his parents and his two sisters — testified that his arrest came as a big shock to her “without a doubt.”

“What I got to know of him is that he is very well-mannered … respectful to others, loving towards children and his parents,” she said in her second day on the stand.

“I don’t believe it,” she said, when asked if she believed Aguirre had tortured and murdered the boy.

Jurors had also heard earlier in the week from one of Aguirre’s sisters, Elizabeth, who testified that she did not believe that he had tortured and murdered Gabriel, and would believe that her brother punched the boy 10 times in the face “if he tells me so.”

The defense ended its portion of the penalty phase with testimony from a consultant who spent more than 26 years working for the California Department of Corrections and Rehabilitation.

“I think he is more likely to be prey than predator,” William Adams said, opining on how the defendant might be treated by other inmates in state prison.

He cited the defendant’s lack of prior criminal history and said Aguirre’s prior work with the elderly may help him to get work as a caregiver for inmates with disabilities if he is sentenced to life in prison without the possibility of parole.

“I don’t personally know Mr. Aguirre. I know he’s been convicted of terrible things,” Adams said, telling jurors that it was his personal opinion that Aguirre committed “an evil act.”

In his opening statement during the trial’s penalty phase last month, Deputy District Attorney Jonathan Hatami called Aguirre was an “evil” man who “liked torturing” the boy and did so systematically in the months leading up to the child’s death because he thought his girlfriend’s son was gay.

One of Aguirre’s attorneys, Michael Sklar, acknowledged during the guilt phase of the trial that Aguirre killed the boy, but said the defendant “acted in a rage of anger followed by an explosion of violence.”

Jurors also heard during the trial’s penalty phase from witnesses including the boy’s biological father, Arnold Contreras, who said he felt guilty and hopeless when he learned that his son had been beaten and was on life support.

The boy’s father said he “should have been there,” but was in a Riverside County jail at the time. He told jurors that he never wanted his son to move in with the boy’s mother or her boyfriend, saying she had never shown any affection for him.

Prosecutors said earlier that Contreras believed the boy’s maternal grandparents would be caring for his son, but that Fernandez and Aguirre “took him away.”

The final witness called by the prosecution last week was the boy’s uncle, Christopher Contreras, who said he still remembers the way his nephew looked in the hospital whenever he thinks about him.

In emotional testimony, the military veteran said he had “seen some bad stuff in war,” but what his nephew went through “makes it nothing.”

Jurors were shown photos of the boy’s battered body lying on an autopsy table with injuries from head to toe and heard testimony from a Los Angeles County sheriff’s detective that he had never seen a child with that many injuries in his 26-year career in law enforcement.

Los Angeles County Fire Department personnel went to the family’s home in the 200 block of East Avenue Q-10 in Palmdale on May 22, 2013, in response to a call that Gabriel was not breathing. He was declared brain-dead that day and taken off life support two days later.

Aguirre and Fernandez have been jailed without bail since being charged in May 2013 with the boy’s death. The two were subsequently indicted by a Los Angeles County grand jury.

Teacher reported alleged abuse of boy months before his death