“This driver needs to be brought to justice as this accident is now a homicide because he/she left the scene. Christina’s mother, husband, son and brother are waiting to hear this person has been apprehended,” the family stated on a flyer distributed to the public in hopes of finding answers. [View the flyer here.]

The hit-and-run collision happened around 5 p.m. Friday, Oct. 27, on northbound State Route 14 at State Route 58, according to the California Highway Patrol.

Christina was driving a 2007 Honda Accord northbound on State Route 14 in the No. 1 lane when a big rig driver that had stopped at the westbound State Route 58 off ramp suddenly crossed into Christina’s path, according to the California Highway Patrol.

“As the tractor trailer combination partially entered the transition to southbound State Route 14, the rear of the tractor trailer blocked all of the No. 1 lane and half of the No. 2 lane of northbound State Route 14. The Honda’s driver applied brakes and turned her vehicle sharply to the right, but she was unable to avoid a collision, and the Honda struck the back of the trailer,” according to a CHP report. [Read more on the fatal collision here.]

Christina’s Honda flipped onto a dirt center median, careened across State Route 14, then rolled down a 100-foot embankment.

“The big rig left the scene of the accident after it happened, leaving Christina alone to die at the bottom of the embankment,” family members said in the flyer.

The CHP Mojave Area is trying to locate witnesses to this collision and asking anyone with information to contact CHP’s Bishop Dispatch Center at 760-872-5900 or 1-800-TELL-CHP. 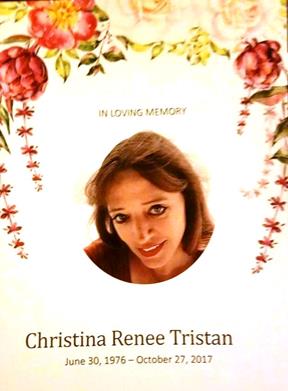 Loved ones created a “Justice for Christina Renee Tristan” Facebook page in hopes of getting answers.

“We need help catching the driver who murdered Christina… The loss of her life was enough to bring a tear to everyone who heard the news,” stated family friend Emily Vernon.

Asked to let the public know about Christina’s character, her family [via Joseph Crance] gave the following response to The AV Times:

“Christina was the kind of person who would help anyone with anything. She was always willing to give her time, her listening ears, or even her last dollar to anyone if it meant it would take away some of their pain. She was the kind of mother you wished you had, but maybe didn’t. Hell, I had never even heard of anyone describing that such a mom could even exist. Her love was so powerful that her family would never complain about helping her help others. Her husband, (Jesse), always said that if it was what Christina wanted, he was happy to be a part of it just so he could be near her. Her smile shows her happiness, her eyes showed her love. We want the public to know that she was not just another good hearted person, but that she would help you find justice even if she did not directly know you. If you were a friend of a friend, that was good enough for her… Her mother now says, ‘If I can be half the woman Christina was, I would be lucky to be that…’

Christina’s God-given gift was that she could take anyone’s brokenness and make it whole. Please let the public know that she was the kind of person that would be able to forgive the driver that did this, and probably already has. To say the family is hurting would be not only an understatement, but a non-truth because there are no words to describe their pain, and no direction of how to go on.”