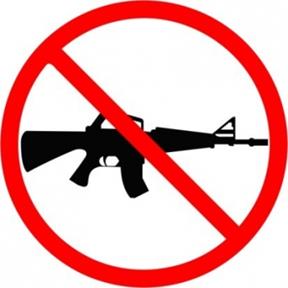 LOS ANGELES – The Los Angeles County Board of Supervisors voted 4-0 Tuesday to support a proposed federal ban on assault rifles.

Supervisor Kathryn Barger abstained from the vote, saying she was concerned about states’ rights and worried that the threat of a ban could boost gun sales.

Supervisor Mark Ridley-Thomas recommended the board’s support, recalling the victims of a long list of mass shootings, including the massacre of 58 people at the Route 91 Harvest Country Music Festival in Las Vegas in October and the Sutherland Springs church shooting of 26 people in Texas earlier this month.

“This bill recognizes military style assault rifles have no business in the hands of civilians,” Ridley-Thomas said of the legislation introduced by Sen. Dianne Feinstein. [View the legislation here.]

An assault weapons ban authored by the California senator was passed by Congress in 1994, but ended 10 years later when Congress failed to reauthorize it. Feinstein tried to reinstate it in 2013, following the Sandy Hook Elementary School shooting, but the measure was voted down.

Mass shootings “dropped some 40 percent” under the prior ban, Ridley-Thomas told his colleagues. “You can’t argue with the data; we need to govern by the data.”

It was not immediately clear what study Ridley-Thomas was citing in his motion [view the motion here], but data has been used by both sides of the gun control debate to make their case for and against a ban on military-style weapons that allow shooters to fire multiple rounds with only one pull of a trigger.

Opponents of such a ban often point to statistics showing that the vast majority of those killed by guns in the U.S. are killed by handguns, not military-style weapons. There were more than 11,000 gun-related homicides in the U.S. in 2014, according to the latest statistics on the Centers for Disease Control and Prevention’s website.

However, 65 percent of American voters support a nationwide ban, a record high, according to a November Quinnipiac University poll.

The proposed assault ban would also prohibit the use of devices that effectively convert more traditional firearms into assault weapons, like the “bump stocks” used by the Las Vegas gunman.

Barger said the vote was “a tough one for me, because I believe in states’ rights,” noting that California already has a ban on such weapons. “This country does not do enough to enforce what’s on the books right now.”