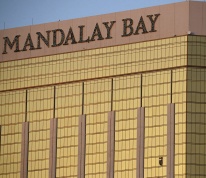 A gunman perched on the 32nd floor of the Mandalay Bay Resort and Casino unleashed hails of bullets on fans watching the festival as headliner Jason Aldean performed.

Law enforcement officials in Las Vegas said Monday morning at least 59 people were killed and 527 were wounded by the lone gunman, who was identified as 64-year- old Stephen Paddock of Mesquite, Nevada.

An FBI official in Las Vegas said Paddock did not appear to have any connection to terrorism, despite a reported claim of responsibility by the terrorist group ISIS.

Paddock’s ex-wife lives in Cerritos, and she apparently called the Los Angeles County Sheriff’s Department after news of the shooting broke. The woman, who isn’t speaking publicly, told deputies she was married to Paddock for six years, but they’ve been divorced for more than two decades, sheriff’s officials told reporters at the scene.

One Los Angeles County sheriff’s employee was shot during the melee and was listed in critical condition Monday, while a second was displaying stable vital signs, authorities said.

Los Angeles County Sheriff Jim McDonnell said the critically injured deputy is assigned to the Norwalk station. The other wounded person is a male sergeant who is assigned to the “executive offices,” and he was awaiting surgery as of late Monday morning. Their names were not released.

The Los Angeles County Fire Department announced that three of its members were struck by gunfire and sustained non-life-threatening injuries.

With initial reports of multiple shooters in numerous locations in Las Vegas, McDonnell activated the Department Operations Center shortly after the shooting was reported and readied a response team that included SWAT teams and a bomb squad, the Sheriff’s Information Bureau reported.

Additionally, a Super Puma helicopter was prepared  for deployment, but the crew stood down after the Las Vegas Metro SWAT team determined that a single shooter was involved.

“What we’ve done is we’ve stepped up our level of vigilance throughout the county — all of our venues where we have large crowds of people coming together,” McDonnell said.

“Certainly a higher visibility of our folks; a greater level of interaction with the public. We will continue to do that at all of the venues that draw large crowds, as well critical infrastructure sites, such as our transit system, at the port system and at other places,” McDonnell added.

A Los Angeles Police Department officer assigned to the Foothill Division was shot in the leg in the mass-shooting, said Officer Rosario Herrera of the LAPD’s Media Relations Section.

At least seven off-duty LAFD employees were at the concert, and two of them were wounded, said LAFD Chief Ralph Terrazas.

One off-duty Orange County Sheriff’s Department deputy was wounded, as were two family members of other OCSD personnel, but none of the injuries was life-threatening, the OCSD reported.