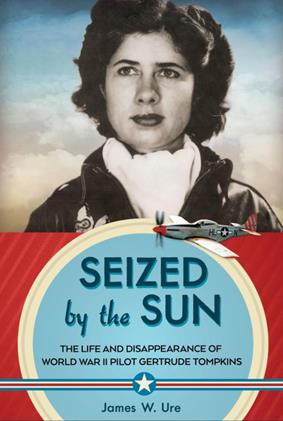 PALMDALE – The city of Palmdale will host a meet and greet presentation Tuesday morning featuring author James W. Ure, who will discuss his book Seized by the Sun: The Life and Disappearance of World War II Pilot Gertrude Tompkins.

The presentation will take place in the picnic area near the T-33. It is free and open to the public. The Palmdale City Library’s Techmobile will also be on site.

Seized by the Sun is the story of a remarkable woman who overcame a troubled childhood and the societal constraints of her time to find her calling flying one of the fastest fighter planes of World War II. It is also a compelling unsolved mystery.

Born in 1912 to a wealthy New Jersey family, Gertrude’s childhood was marked by her mother’s bouts with depression and her father’s relentless search for a cure for the debilitating stutter that afflicted Gertrude throughout her life. Teased and struggling in school, young Gertrude retreated to a solitary existence. As a young woman she dabbled in raising goats and aimlessly crisscrossed the globe in an attempt to discover her purpose.

As war loomed in Europe, Gertrude met the love of her life, a Royal Air Force pilot who was killed flying over Holland. Telling her sister that she “couldn’t stop crying, so she focused on learning to fly,” Gertrude applied to join the newly formed Women’s Airforce Service Pilots. She went on to become such a superior pilot that she was one of only 126 WASPs selected to fly fighter planes. After her first flight in the powerful P-51 Mustang, her stutter left her for good. Gertrude’s sudden disappearance remains a mystery to this day.

Ure is a former staff writer and editor at the Salt Lake Tribune and wrote features for the Deseret News, as well as other newspapers and magazines. He is also a former publicist and executive director of the Sundance Film Festival. He lives in Salt Lake City, Utah.