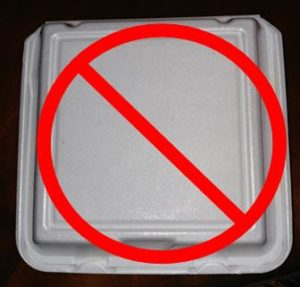 LOS ANGELES  – The Los Angeles County Board of Supervisors voted Tuesday to study a potential ban on polystyrene food containers in unincorporated areas of Los Angeles County [including Quartz Hill, Littlerock and Lake Los Angeles], saying they are piling up in landfills and polluting beaches.

Supervisor Sheila Kuehl said it was time to revisit a 2011 feasibility study on the issue. [View the study here.]

“(Polystyrene) breaks down into little beads, gets into waterways and it does not biodegrade,” Kuehl said of single-use straws, plastic cups and clamshell-shaped molded take-out containers that can be found stuffed in overflowing trash bins around the county.

More than 100 other municipalities in the state have restricted or prohibited the plastic foodservice ware in favor of other reusable, recyclable or biodegradable alternatives, according to Kuehl.

Following the 2011 study, a decision about a local ban was postponed in favor of a proposed statewide ban. That legislation was never enacted.

Environmentalists said the plastic containers are among the top targets of clean-up efforts because they can end up being eaten by birds, sea turtles and other marine life.

“Nearly a billion dollars a year are spent in cleaning up marine debris,” Ryan Searcy of Heal the Bay told the board, citing statewide numbers.

At the current rate, “There will be more plastic than fish by weight by 2050,” he said, referring to research by the World Economic Forum about plastic garbage in oceans worldwide.

Manufacturers and restaurant owners said polystyrene does the best job of keeping food hot or cold and said many alternatives aren’t sturdy enough to do the job without breaking or spilling out contents.

They also raised concerns about the costs of switching to another product.

“These families are in their restaurants seven days a week working” and don’t have time to navigate hardship exemptions that could be granted under as part of a polystyrene ban, Tessler said, urging the board to focus on expanding recycling programs.

Proponents of a ban argued that the foam containers aren’t recyclable once they are soiled by food, a notion that Tessler and others disputed. The city of Los Angeles accepts polystyrene containers in residential recycling bins.

Ann Nguyen of Dart Container, which makes polystyrene containers, said a ban would lead to a shutdown of both of the company’s California plants — putting 650 employees out of work — because it would be too expensive to re-tool the facilities.

“It is in Dart’s DNA to be an environmental steward,” Nguyen told the board, citing millions of dollars in research and development work.

The company and other plastics manufacturers have stressed waste management, including recycling, clean-up projects and efforts to end consumer littering as solutions to the problem of marine debris.

Kuehl urged small business to work with the county rather than fighting the change.

“This is something that’s probably going to happen,” Kuehl said.

Supervisor Janice Hahn, who co-authored the motion, said she had heard from a lot of small business owners concerned about the county’s plans.

Hahn asked that employees of the Department of Consumer and Business Affairs be included in the working group responsible for updating and expanding the 2011 study. That team will review new “green” alternatives, the health risks associated with polystyrene and the potential to expand recycling and composting polystyrene and alternative materials.

A report is expected back in four months.