LOS ANGELES — The public supports the use of a drone by the Los Angeles County Sheriff’s Department, authorities announced this week, citing a recently completed online survey.

“The feedback from the general public showed that 89 percent of those that responded supported the use of the UAS [unmanned aircraft system] platform for emergency or life-threatening situations,” according to a news release from the Sheriff’s Information Bureau. 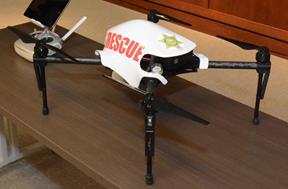 The two-week online survey was conducted in early July and yielded 3,054 responses. Of those that responded, half were familiar with the UAS platform and the other half were unfamiliar with the program before learning about it through the survey, the news release states.

“Supportive comments from those surveyed included, ‘If it keeps people safe I’m all for it’ and ‘I feel it would allow the LASD [to] better assess how to help in a large variety of circumstances where human or helicopters are not available or able to safely assess needs or a dire situation,’” the sheriff’s news release states.

Eleven percent of the respondents did not approve of a sheriff drone, and cited concerns such as racial profiling and invasion of privacy, according to the sheriff’s department.

“Many of the concerns over issues such as personal privacy were addressed in the Department’s initial news conference and news release about the program… The system will only be used in a constitutionally and legally sound manner, and in compliance with Federal Aviation Administration (FAA) regulations,” sheriff’s officials said in the news release. [View video from the initial news conference here.]

The unmanned aircraft system — a remote controlled unit with an on-board video camera — is assigned to the Special Enforcement Bureau, which comprises the Emergency Services, Special Enforcement, Arson/Explosives and HazMat details.

Sheriff Jim McDonnell announced the acquisition of the drone in January, saying the Federal Aviation Administration had also approved its use in hazardous materials incidents, disaster response, arson fires and with barricaded, armed suspects.

Since its acquisition, the sheriff’s drone has been used in five search and rescue operations and one incident involving an armed gunman, according to the sheriff’s department.

“We have always, from the very first day, wanted to be completely transparent,” stated Captain Ewell from the Sheriff’s Special Enforcement Bureau. “The UAS can be deployed quickly and provide close-up views of uncertain, isolated or hostile situations. This new tool will provide safety for deputy sheriffs and community members approaching the incident.”

According to the sheriff’s department, authorized missions for UAS rescue deployment include:

The drone will not be used for random surveillance or and any other situation which would violate department policy or Fourth Amendment constitutional rights, sheriff’s officials said in the news release.

26 comments for "Survey says… Public in favor of LASD drone"