LANCASTER — Family members and loved ones are holding a community vigil Wednesday evening for Lonzel Monjae Francisco, the 14-year-old Lancaster resident who died early Sunday morning after an ATV accident during a night ride in San Bernardino.

This is the second vigil for the popular Lancaster teen, who recently graduated from Amargosa Creek Middle School and was a defensive lineman for Highland Youth Football’s “Highland Bulldogs.”

“Lonzel was an outstanding athlete and student that genuinely cared for everyone. He touched so many people in a positive way,” said Highland Youth Football Coach Byron Devers. “As a community we are devastated by this loss and will miss him dearly.”

Lonzel’s teammates will wear their “Bulldogs” jerseys to the vigil Wednesday, and attendees are encouraged  to wear “Bulldogs” gear, as well, organizers said. Marie Kerr Park is the site where the team practiced.

The first vigil, an impromptu event the day after Lonzel’s death, was extremely well attended. Residents of all ages packed Journey Church in Lancaster, and many told heartwarming stories about how Lonzel impacted their lives, said family friend Pearl Devers.

“Lonzel was some special kind of kid,” Pearl Devers said. “Most people thought he was special only to them, but this first vigil turn-out has proven quite the contrary.”

Funeral arrangements and other services for Lonzel are still pending.

Donations to the Francisco family can be made to: PO Box 1993, Lancaster, CA 93539 or through PayPal at lorie.francisco@ymail.com.

View a flyer for Wednesday’s vigil below. 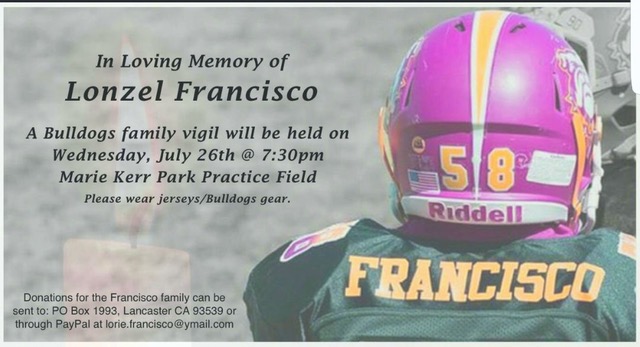