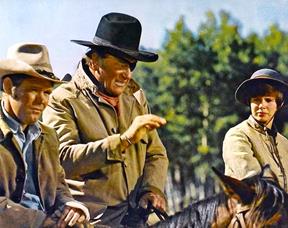 PALMDALE –The Palmdale Playhouse continues it Summer Classic Movie Series on Thursday, July 27, with a presentation of the western classic “True Grit”.

Tickets are $5 and are available only at the Palmdale Playhouse Box office. Guests who arrive early can enjoy a complimentary dessert and beverage with paid admission.

True Grit is a 1969 American western that tells the story of a drunken, hard-nosed U.S. Marshal and a Texas Ranger helping a stubborn teenager track down her father’s murderer in Indian territory.

Starring Kim Darby as Mattie Ross and John Wayne as U.S. Marshal Rooster Cogburn, it marks Wayne’s only Academy Award for his performance in this film.

“Enjoy one of the legends of film in one of his greatest performances—John Wayne—in a comfortable seat at the Playhouse and as it was originally shown—on the big screen,” stated Palmdale’s Recreation Supervisor Annie Pagliaro.