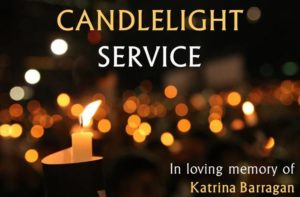 LANCASTER – A candlelight service will be held Friday evening for Katrina Barragan, the 37-year-old mother of two stabbed to death after a domestic dispute in Lancaster last week.

The service will be held from 6 to 8 p.m. Friday, July 7, at Antelope Valley Hospital’s Community Resource Center, located at 44151 15th Street West in Lancaster. Candles will be provided. [View a flyer for this event here.]

The event will also serve as a donation drive for the Valley Oasis Domestic Violence Shelter. All donations will be accepted, but the shelter is especially in need of small throw blankets, teddy bears, and travel-sized toiletries.

Katrina Barragan was stabbed Saturday, July 1, in the 4200 block of Jonathon Street, after getting into an argument with her husband, 47-year-old Rafael Barragan, according to the sheriff’s department.

Paramedics rushed Katrina Barragan to a hospital, where she was pronounced dead, officials said.

Rafael Barragan, who was initially held for questioning, was arrested on Sunday, July 2, and booked on suspicion of murder. He is being held at the Men’s Central Jail in downtown Los Angeles in lieu of $2 million bail, according to the sheriff’s department.

The suspected murder weapon was recovered at the scene, according to Deputy Ryan Rouzan of the Sheriff’s Information Bureau said.

Katrina Barragan was a nurse at Antelope Valley Hospital, her friends said.