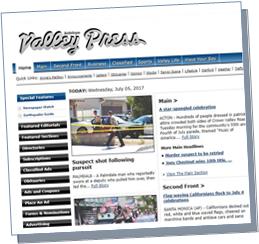 PALMDALE – The Antelope Valley Press has been sold to a new owner.

The newspaper has been a family-owned business since 1915 but will now be run by a new entity called Antelope Valley Press Inc., led by Canadian newspaper executive Steven Malkowich, according to a statement issued by the previous owners and reported by the Los Angeles Daily News.

“Now is the time for our family to make way for others with greater resources than ours,” former Publisher William Markham said in a statement issued to the Daily News through New Mexico-based merger and acquisition firm Dirks, Van Essen & Murray. The firm represented Markham, his brother and sister in the sale.

The new owners have newspaper assets throughout Canada and the United States, including the Lodi News-Sentinel in the Central Valley, the Daily News reported.

The Palmdale-based Antelope Valley Press has a daily circulation of 11,000 during the week and 18,000 on Sundays, according to the outgoing owners. It was founded by A.J. Hicks on April 3, 1915.