PALMDALE – For the second year in a row, Yitzel Serna, a GATE student from Palmdale Learning Plaza and an ambassador with the Palmdale Promise, has earned the opportunity to compete in the Jr. NBA National competition.

Yitzel was one of 20 finalists selected from more than 65,000 participants nationwide to win an all expense paid trip to New York City to compete in this month’s Jr. NBA National Finals.

The competition affords boys and girls, ages 14 and younger, the opportunity to showcase the foundation of the game through dribbling, shooting, and rebounding competitions. 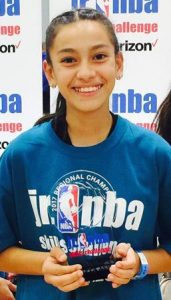 “She put in the hours and understands the correlation between hard work and results,” stated Yitzel’s father, Cesar Serna.

The skills challenge is a one-minute competition that begins with zig-zag dribbling around cones followed by speed dribbling. Students then have the remaining time to shoot from designated spots, and the made shots earn different point values based on adversity. Once the minute is over, students shoot a free throw for bonus points.

Her overall score for her age group qualified her to be one of the top five kids in the nation.