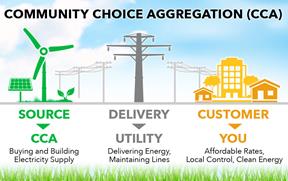 Supervisor Sheila Kuehl recommended setting up the nonprofit entity under a state law allowing Community Choice Aggregation. Kuehl credited former Supervisor Don Knabe as a champion of the effort, saying work toward a CCA had been underway for about two years.

“Today is the first day of a green future for Los Angeles County,” Kuehl told her colleagues. “While Washington is gleefully slashing environmental protections and further jeopardizing the future of the planet, we in L.A. County have an opportunity to move in a newer, smarter direction.”

Advocates said a locally-run aggregator that purchases power from wholesalers can cut rates to consumers and promote renewable energy sources. Kuehl said other CCAs have cut power costs by as much as 5 percent.

Supervisor Mark Ridley-Thomas, who co-authored the motion, called the CCA a “game-changer.”

“Our residents deserve this. They deserve cheaper, cleaner energy,” he said.

State law gave cities and counties the authority to organize CCAs in 2002. Lancaster set up a program in 2015, and there are eight other CCAs statewide with several others set to launch this year, according to Kuehl’s motion. [View it here.]

The $10 million will fund start-up costs, including $8 million for buying power and $2 million for staffing and administrative costs.

The program is expected to launch in three phases. County facilities will come on line first, then commercial, industrial and municipal customers will be offered service beginning in July 2018. The last phase, set to begin in January 2019, will be to offer power to residential customers in unincorporated Los Angeles County and participating cities, an estimated 1.5 million customer accounts.

When the CCA is established for residential customers, it will become the default provider and customers wishing to remain with SCE will need to opt out of the CCA to do so.

Supervisor Janice Hahn said that in addition to promoting renewable energy, the “greatest opportunity about this is the creation of jobs.”

Supervisor Kathryn Barger said she was “very excited” about giving consumers a choice and anticipated that the competition could hold down utility rates overall.

“It’s going to give a separate scale by which to weigh utility requests for higher rates,” Barger said, mentioning frustration with Southern California Gas Co. related to the Aliso Canyon gas leak.

Oversight of and rate-setting for the new agency would rest with the board and representatives from participating municipalities.

Cities from Torrance to Palmdale are considering joining the CCA.

Southern California Edison’s position is “neutral on CCA programs,” the utility said in a statement.