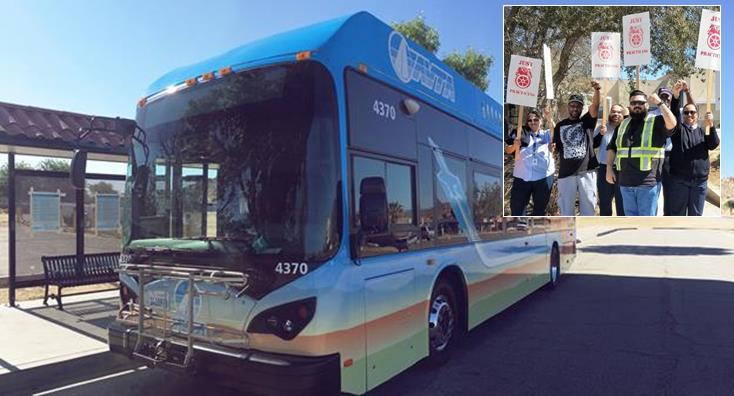 LANCASTER – Bus drivers are back on the job in the Antelope Valley this week, despite rejecting a contract offer from management over the weekend.

About 120 drivers with the Antelope Valley Transit Authority walked off the job Friday, March 17, over disagreements between their union and Transdev, which contracts with the AVTA.

On Saturday, the drivers rejected Transdev’s latest offer, but drivers decided to return to work Sunday while the issues concerning wages and working conditions continue to be hashed out.

“…In order to restore service to the public, the drivers have elected to return to work to give Transdev and the ATVA the opportunity to … resolve the serious issues raised by the bus drivers,” said Eric Tate, secretary-treasurer of Teamsters Local 848.

Tate told City News Service Monday that the drivers voted 104 to 0 to reject the latest offer on Saturday, and that no date currently exists for a return to negotiations.

“We’re looking for the company to step up and return to the bargain table seriously,” he said, adding that the issues went beyond just wages.

“There are a lot of working condition problems with the buses, mandatory overtime, that’s the reasons they went on strike on Friday,” Tate said.

The bus drivers specified their grievances last week in a letter to The AV Times. [Read it here.]

Efforts to reach ATVA officials for comment were unsuccessful.

The transit agency released statements regarding the strike on Friday and Saturday.

“While AVTA is not a party to the strike initiated by the Teamsters Local 848, we encourage both parties to utilize federal mediation to resolve this dispute.” AVTA officials said in the statement. [Read both statements here.]