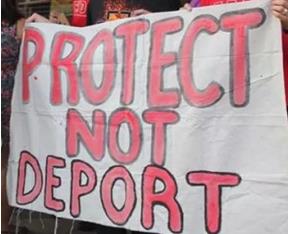 LOS ANGELES  – Supervisor Hilda Solis warned Tuesday that changes to federal policy proposed by the president-elect could result in the deportation of nearly half a million Los Angeles County residents and said she wanted to explore the county’s authority to prevent federal immigration enforcement at courts, schools and hospitals.

Solis previewed a motion calling for strategies to protect immigrants that she plans to formally submit to the Board of Supervisors in two weeks.

“Many of the election promises made by President-elect Donald Trump during his campaign would, if enacted, have devastating consequences for Los Angeles County, not only for immigrant communities, but also for our economy, safety net and social cohesion,” Solis told her colleagues.

Solis said Trump’s election had provoked anxiety and fear, particularly among the county’s 3 million immigrant residents, roughly half of whom she said are citizens.

The supervisor said she felt a moral imperative to reassure immigrants that the county would defend their rights and interests, adding that a majority of children are vulnerable.

Many of those at risk are currently protected under the Deferred Action for Childhood Arrival program. Under DACA, children brought to the U.S. before the age of 16 are able to apply for work permits and live without the threat of deportation.

President Barack Obama took executive action to expand DACA and implement a similar program for parents, called Deferred Action for Parents of Americans and Lawful Permanent Residents. Those moves have been blocked by lawsuits that went as far as the U.S. Supreme Court, where a 4-4 vote in June sent the matter back to the lower court. Trump has promised to terminate both programs.

Solis also pointed to Trump’s stated desire, supported by many Republicans, to repeal Obamacare. She said the move would mean hundreds of thousands of residents could lose access to healthcare, resulting in a flood of patients to county emergency rooms.

Solis said she would propose a task force to develop strategies for protecting immigrant residents, including the possibility of a county department of immigrant affairs. Her motion also recommends that the county look at ways to protect the data and identities of immigrant residents and asks Sheriff Jim McDonnell to report on his plans in the event the new administration backs mass deportation.

The president-elect once threatened widespread deportation but has in recent days seemed to soften his tone, saying in a “60 Minutes” interview that he would focus on roughly 2 to 3 million individuals with criminal records.

Each of the 10 points in Trump’s “10 Point Plan to Put America First,” laid out on his campaign website, focuses on immigration. Beginning with “an impenetrable physical wall on the southern border, on day one,” the plan promises to “move criminal aliens out day one” but does not stop there. It also calls to “end sanctuary cities” and triple the number of federal immigration agents.