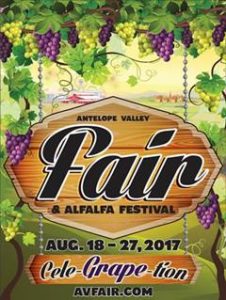 Bob Sepulveda of Palmdale crafted the winning theme, which was chosen from 977 entries submitted to the annual contest.

To qualify, theme ideas had to be five words or less and centered around “grapes.”

The Fair’s board of directors chose Sepulveda’s “Cele-grape-tion” as the winning theme because it followed theme criteria and captured the essence of what the Fair is all about, according to Marketing Director Wendy Bozigian.

When told his entry won, Sepulveda exclaimed, “Really? I won?  How great is that?!”

When asked how he came up with his winning theme, Sepulveda said, “I like getting involved in stuff like this and just started playing around with the word grapes.”

Bozigian added, “This theme is a clever play on words that fits perfectly with the 2017 topic of grapes, and that the A.V. Fair is an annual celebration. It also provides our graphic designer, Maby Hernandez, flexibility in creating artwork to illustrate this theme throughout Fair 2017 advertisements and promotions.”

For creating the winning theme, Sepulveda will receive two tickets to the Fair 2017 Palmdale Auto Mall Concert Series and all Rally Kia Arena events, plus a Fair Season parking pass. Sepulveda will be recognized at the annual “Kick-Off” (Volunteer Appreciation) dinner scheduled for July 28, and he will ride as a VIP in the A.V. Fair parade on Aug. 19.

[Information via news release from the Antelope Valley Fair Association.]