LANCASTER – Law enforcement officers from across the county and the nation gathered in Lancaster Thursday to bid farewell to slain Los Angeles County sheriff’s Sgt. Steve Owen, who was remembered as a larger-than-life figure who made an indelible mark on the Antelope Valley community with his dedication and compassion.

Owen, 53, was fatally shot while responding to a burglary call on Oct. 5.

A sea of law enforcement vehicles packed streets leading to Lancaster Baptist Church, 4020 E. Lancaster Blvd., for the funeral service, and many members of the community lined streets to show their support. 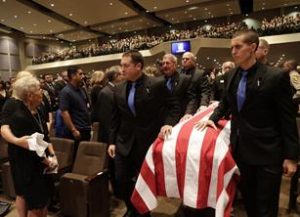 “The level of support and the outpouring of prayer from the community has been unlike anything I’ve witnessed in my 33 years with the sheriff’s department,” Capt. Pat Nelson of the Lancaster station told the crowd inside the church.

Nelson said Owen — affectionately known as “Bullfrog” — showed unrelenting dedication to the community he served since 1992 in a variety of positions with the sheriff’s department.

“The one constant has always been Steve’s enthusiasm for seeking out those who would do our community harm,” Nelson said. “He was a tireless patrol deputy, a relentless investigator and the consummate sergeant. He truly loved his team and his community.

“He was also a coach, a friend, a mentor to so many other members of our community, and I’m proud to say that he’s been my friend for over 20 years. We will all miss him terribly.”

Sheriff Jim McDonnell told stories about how Owen met his wife, Tania, on the job, and about his efforts to help the community beyond just his service with the department.

“It helps to put into perspective the experiences we’ve all had over the past couple of years doing our job,” McDonnell said. “The criticisms of our efforts across the country are more memorable than the success of the good work under way every single day.”

He said Owen represented the best of law enforcement and set an example deserving of being met by police and sheriff’s deputies.

“We have deputies out there coaching and mentoring, many because of Steve’s example,” McDonnell said. “There are people — fathers, mothers, daughters, sons — who wear the badge who go out there and answer calls because whenever something goes wrong in life people call 911 and the police respond. Every 61 hours in America, a police officer is killed in the line of duty because they and their families chose a profession that puts them between harm and the public we serve.”

Also among those attending the service were Gov. Jerry Brown, Los Angeles County District Attorney Jackie Lacey, county Supervisor Michael D. Antonovich and Lancaster Mayor R. Rex Parris. Law enforcement officers from jurisdictions from as far away as New York were on hand for the service.

Early Thursday morning, hundreds of law enforcement motorcycles and patrol vehicles staged along Sierra Highway south of Lancaster Boulevard for a procession, which began shortly before 9 a.m. and reached the church in about an hour.

The procession included a riderless horse — Owen was a member of the mounted detail — with a pair of boots mounted backward in the stirrups. McDonnell said the horse was Owen’s, named Max.

Owen’s children — Chad, 27, Brandon, 24, and Shannon, 22 — all spoke during the service, calling their father a deeply religious man who was nothing short of a hero to them. Brandon called him “a superhero I lived with every day.”

“Last week all of us and my family witnessed the worst of humanity,” Brandon Owen said. “… But in every minute since we have experienced the best of people, providing reassurance of God’s faithfulness and sovereignty. This what my dad saw, what our dad saw, in everyone. The absolute best they could be.”

He said his father was a great sheriff’s sergeant, but “that is not solely who he was.”

“He was an incredible protector. The definition of a true man and a hero to so many. He lived a life of strength and gentleness, power and grace. He was stern yet caring. … What made him the ultimate hero? What gave him the ability to change so many lives? Surely I tell you it was much more about his heart than it was about his badge, and his heart was firmly anchored in his faith in Jesus Christ.”

Owen, a decorated 29-year sheriff’s department veteran who served as a sergeant in the Lancaster Station for the past five years, was killed at 12:30 p.m. Oct. 5 in the 3200 block of West Avenue J-7, where he had responded to a burglary report.

The suspected shooter, parolee Trenton Trevon Lovell, 27, has been charged with capital murder, among other counts.

McDonnell said Lovell shot Owen behind a residence after being confronted by the sergeant, who radioed that he had the suspect at gunpoint before he was shot.

“He (Lovell) then stood over and executed Sgt. Owen by firing four additional rounds into his body,” McDonnell said. “He then unsuccessfully searched the body for the sergeant’s weapon with the intent to use it to murder the first responding deputy.”

Owen’s wife, who is a sheriff’s arson-explosives detective, made it to the hospital before her husband died, according to sheriff’s Executive Officer Neal Tyler. One of Owen’s two adult sons and his stepdaughter, as well his mother, also were at his bedside, Tyler said.

Owen’s death sparked an outpouring of grief, with many in the Antelope Valley praising him for his service, conduct and community involvement, especially with area youths.

“We want to say thank you for the love and support you have shown our family as we mourn the loss of our husband, father, brother, uncle, son, and ultimately our hero, Sgt. Steve Owen,” Owen’s family said in a statement.

“The continuous outpouring of encouragement, gratitude, and respect for him that has come from our community and across the nation has brought us the comfort and the strength needed to survive this tragedy. … You all have truly touched our hearts.”

Memorial service for slain sergeant to be live-streamed