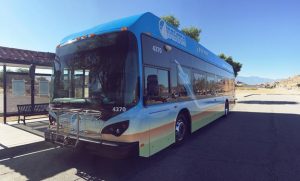 LANCASTER – The Antelope Valley Transit Authority will begin implementing service changes to some of its local routes beginning Monday, Aug. 29, the agency announced.

“We are constantly monitoring our system to analyze our performance, and potential adjustments to streamline and improve service are proposed twice a year,” stated Executive Director Len Engel. “We invite feedback year-round from our customers and strive to incorporate input into the service change development process.”

AVTA’s Board of Directors voted unanimously to approve the recommendations of staff at its meeting on May 24. One notable change will be the frequency on Route 1, from 30 minutes down to 20 minutes during peak hours. Saturday service frequency on Route 1 will also change from 60 to 30 minutes most of the day and extended to 10 p.m. This will be accomplished by eliminating Route 10 and utilizing its buses on Route 1.

Another service change will occur on AVTA’s Route 7, to provide better access to Antelope Valley College for Palmdale residents. While still running through Palmdale and Rancho Vista, the revised Route 7 will now head east from the college through Lancaster to Sierra Highway, and will provide a more direct route between the Palmdale and Lancaster campuses for AVC students. Residents in northern Lancaster may now use the new Route 9 to reach destinations previously serviced by the old Route 7, such Lancaster City Park, Lancaster Metrolink, University of the Antelope Valley and the AV Fairgrounds.

Routes that serve the communities of Lake LA, Littlerock, Sun Village and Pearblossom (the Lake LA Express and Routes 6 and 15) will become AVTA’s new Routes 50, 51 and 52. Modifications to these routes will improve connectivity to inner-city services and schools, while maintaining their existing frequency.

Complete details of all service changes can be found on www.avta.com.

Over a three month period, agency staff conducted extensive community outreach, inviting the public to give feedback on the proposed service changes. Customers were given the opportunity to voice their opinion through public meetings and direct one-on-one contact with staff. Based on the comments received, the initial proposals were modified to improve connectivity and provide services more tailored to community’s needs.