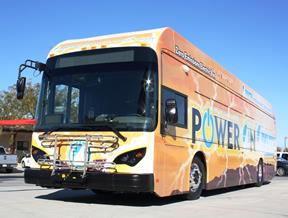 LANCASTER – The Antelope Valley Transit Authority has been selected to receive $6.84 million from the California State Transportation Agency. This funding will add another 10 electric transit buses to AVTA’s fleet, bringing the total to 41 electric buses so far, the agency announced Friday.

“This funding is vital in helping us realize our goal of an all-electric bus fleet, and the fact that we are already halfway there shows that the state of California believes in what we’re doing,” stated AVTA Board Chairman Marvin Crist. “We’re confident that decision makers in Sacramento will continue to invest in the future of transportation here in the Antelope Valley.”

The funding comes from the state’s Transit and Intercity Rail Capital Program (TIRCP), which allocated $390 million to 14 projects that were chosen from a pool of more than 40 applicants from around the state, according to AVTA officials.

The TIRCP is a Cap and Trade program, which receives annual funding for projects that support high quality public transportation while reducing greenhouse gas emissions.

AVTA was previously awarded $24.4 million from the California State Transportation Agency in July 2015 to purchase 29 electric buses, which are slated to arrive by the end of 2016. The buses will be used to improve service on AVTA’s Route 1.

The recent monetary award will allow the agency to procure another 10 zero-emission buses from local electric bus manufacturer BYD. The transit system will use the additional electric buses for cleaner and more frequent service on Routes 7 and 9, increasing the hourly service to every 20-30 minutes throughout the day, according to AVTA officials.

A portion of the funds will be used to launch a zero-emission vanpool program at AVTA, procuring 10 vanpool vehicles that will be made available to residents who commute to jobs throughout the Antelope Valley and the LA Basin.

“We are excited to demonstrate a service model that also utilizes the vanpool vehicles during non commuting hours as a public car-share program,” stated Executive Director Len Engel. “These vehicles may also eventually replace existing employer fleet vehicles. There are numerous possibilities for us to show how vanpool programs can be more productive.”