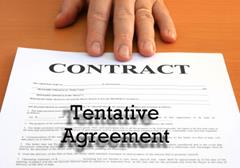 LANCASTER – Antelope Valley Hospital has reached a tentative agreement on a three-year contract with the Service Employees International Union (SEIU), hospital officials announced Tuesday. The agreement concludes three months of negotiations between the hospital and the union.

“The new agreement achieves an honest balance by fairly compensating SEIU employees for their dedication and wonderful service to AVH while at the same time recognizing the financial realities and challenges of running a district hospital,” stated Mike Sarrao, AVH’s chief labor negotiator. “We appreciate the professionalism and diligence demonstrated by the SEIU and
its bargaining team throughout the entire process.”

The union – which includes such roles as dietary personnel, ultrasound and radiology technicians, licensed vocational nurses, and administrative support – represents more than 1,100 of the hospital’s 2,500 employees.

Union members are expected to vote on the contract within the next week, after which it will be presented to the Antelope Valley Healthcare District board of directors for ratification.

If approved it will be effective as of the ratification date.

Throughout negotiations, both parties reviewed and came to agreement on such points as salaries, health benefits, pension plan and paid leave.

“The cooperative tone of our discussions underscored our focus on providing exceptional patient care and quality, mutual respect for each other, and commitment to maintaining positive working relationships because in the end we’re all part of the same AVH family,” Sarrao stated.