PALMDALE – The Palmdale Sheriff’s Station is seeking your help in locating a suspect wanted for assault with a deadly weapon and a suspect wanted for attempting to pass a fictitious bill, both believed to be in the Antelope Valley area. If you recognize them and know where they might be located, contact detectives using the information next to the suspects’ photos or by calling 1-800-222-TIPS. 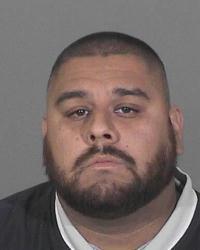 Carlos Rubio is a 27-year-old male with brown eyes and black hair. He is approximately 5 feet 9 inches tall and weighs around 250 pounds.

Rubio is wanted for assault with a deadly weapon.

Rubio is known to frequent the 1500 block of Sweetbrier Street in Palmdale.

Anyone with information on the location of Carlos Rubio is encouraged to contact Detective Saylor at 661-272-2474. 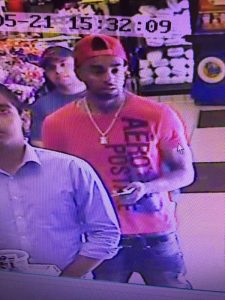 If you recognize the person in this image, contact the Palmdale Sheriff’s Station.

The suspect is wanted for attempting to pass a fictitious bill.

On May 21, the suspect entered the Chevron Gas Station at 460 E. Palmdale Blvd. and attempted to pay for merchandise with a counterfeit bill. When the employee determined the bill was counterfeit, the suspect immediately left the store.

The suspect is a male with a slim build who is believed to be in his 20s.  At the time of the incident, the suspect was wearing a red “Aeropostale” shirt, red hat and blue jeans.

The suspect left the location in a four-door Chevy.

Anyone with information on the identity or location of this suspect is encouraged to contact Detective Gilbert at 661-272-2446.

2 comments for "Palmdale Station’s Most Wanted"